Up
Pixar know how to make a film that will delight every single audience member, and they do it by never talking down to their audience.

By tying thousands of balloons to his home, 78-year-old Carl sets out to fulfill his lifelong dream to see the wilds of South America. Russell, a wilderness explorer 70 years younger, inadvertently becomes a stowaway. 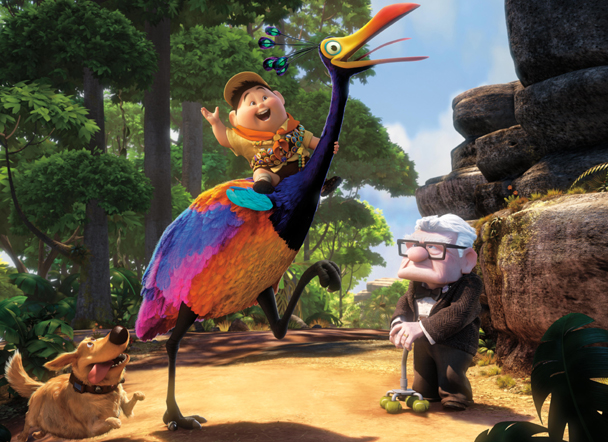 Pixar’s latest offering, the story of Carl, an old man who flies his house to South America to fulfil a lifelong dream, has already garnered a huge amount of praise. No doubt it will win Oscars and be held in the hearts of young and old alike. This is Pixar and that is what they do best. The amazing thing is that every film of theirs is better than the last. You think they’ve hit their peak with Ratatouille, and then Wall-e comes out. You think Wall-e is animated film perfection, and here comes Up. The company seems unable to do wrong and, in my opinion, Up is their greatest film to date, which automatically puts it as one of the best animated features in cinematic history.

This is, of course, a very strong statement, and one that I do not make lightly. Almost everything about the film is pitch perfect. The vocal talent is outstanding, the animation is beyond compare, and the set pieces in either 2d or 3d (yes I did watch it both ways, more on that later) are breathtaking.  Pixar know how to make a film that will delight every single audience member, and they do it by never talking down to their audience.

The writing of the film is extraordinary in its subtlety. The opening montage takes the viewer through the lifelong relationship of Carl and Ellie in less than five minutes, leaving not a single dry eye in the house. The sequence contains no dialogue,and yet effortlessly portrays the enduring love, hardships and heartbreak of this couple’s life.  This may be the first children’s film to deal with infertility, ageing, death and abandonment, and it does so in such a way that children will understand and empathise with, without having it spelled out for them.  A similar display of restraint is in a scene where Russell, the chatty yet charming Junior Wilderness Explorer accidentally brought along for the ride tells Carl about his Dad. No description of his situation is given, but in a few well chosen words his whole home life is revealed. It is this saying so little which says so much.

This is not to say that the film is all tears and intensity, it’s also one of the funniest Pixar have ever done. The cast of supporting characters, including Kevin the giant bird and Dug the talking dog (a clever plot device wherein the dog’s master creates computerized voice boxes for all his pet dogs sets up some of the funniest dialogue in the movie) are all hilarious without pandering to kids film clichés. Again, the comedy comes just as much from the writing as from the visuals.

The look of the film is absolutely stunning. There are moments that are almost photo-real, especially smaller details which, when put in the picture lend a sense of reality to the whole film. The lead characters are allowed to be more caricatured when put in this realist setting without us losing any connection with them. In 2d the film is breathtaking, beautiful and fun, but in 3d it becomes real. As with a lot of the 3d films coming out at the moment, the extra dimension isn’t used for thrills so much as to add depth and realism. Things don’t jump out of the screen at you as much as gain due prominence whilst others fade into the background. The only downside of 3d is the lack of vibrancy of colour. Because the glasses are tinted at times it feels like watching a film with your sunglasses on, but the loss is hugely outweighed by the gain.

So Pixar have done it again, they have made a beautiful, hilarious, heartbreaking film which leaves you uplifted and wanting more, and they do it by respecting their audience both young and old. This is a lesson other animation studios need to learn if they are ever going to try to compete. Pixar are so far ahead of the game that it is difficult to imagine anyone else come close, but if it means more films of this calibre then I, for one, would like to see them try.