Tucker & Dale vs Evil
This fantastic feature-length début from director Eli Craig should set the precedent for comedy horror mash-ups.

When Tucker and Dale save the life of gorgeous student Allison her friends believe she has been kidnapped and set out to rescue her. 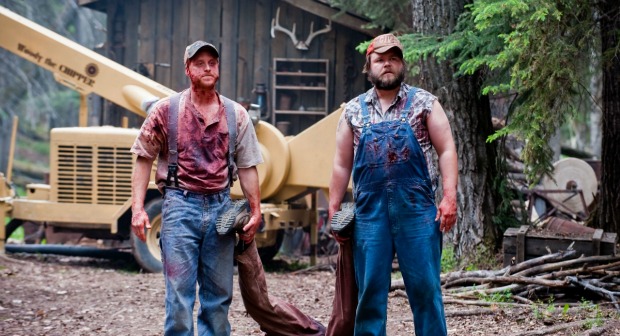 Tucker (Alan Tudyk) and Dale (Tyler Labine) are best friends with a penchant for trucker caps, pickled eggs, and heavy-duty power tools. On their way to fix up a cabin in the middle of the woods they come across some camping college kids who, having seen a horror film or two, mistake the hillbillies for psycho killers. When pair save Alison (Katrina Bowden) from drowning and take her to their cabin to recover, her friends are convinced she has been kidnapped and set out on a mission to rescue her.

As Tucker and Dale become increasingly confused by misguided attacks from the group, lead by the all-too-enthusiastic Chad (Jesse Moss),  the kids start accidentally offing themselves one-by-one in a variety of gruesome ways. Alison, largely oblivious to the carnage as she keeps getting knocked unconscious, becomes increasingly fond of Dale, to the surprise of Tucker.

Tucker & Dale is a hilarious and original take on the hillbilly-horror genre, and has undertones of the spoof Shriek If You Know What I Did Last Friday 13th (which is a great personal favourite). This fantastic feature-length début from director Eli Craig should set the precedent for comedy horror mash-ups.