The World’s End
The Three Flavours Cornetto trilogy is less a means of codifying some sort of creative masterplan and more an excuse for its creators to tread water.

20 years after attempting an epic pub crawl, five childhood friends reunite when one of them becomes hellbent on trying the drinking marathon again. As they attempt to reconcile the past and present, they realise the real struggle is for the future, not just theirs but humankind’s. Reaching The World’s End is the least of their worries. 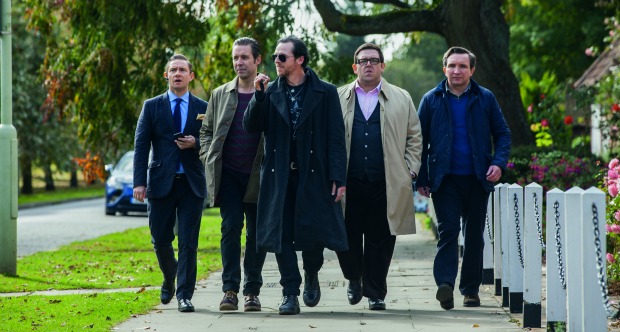 With Shaun of the Dead, director Edgar Wright alongside Simon Pegg and Nick Frost helped create a refreshing and likeable comedy rooted in British culture but paying homage to US movies and comic books. The film centred on male friendship and unlikely heroes, garnering both praise and box office success while opening doors in Hollywood for the three friends and unlikely stars that made it.

Fast-forward nine years and the aforementioned film has led to 2007’s Hot Fuzz and now The World’s End, both likeable comedies about male friendship rooted in British culture but paying homage to US movies and comic books. Understanding why they are said to be part of a loose trilogy dubbed ‘Three Flavours Cornetto’, therefore, is not difficult, but on evidence of this most recent instalment, this label is less a means of codifying some sort of creative masterplan and more an excuse for its creators treading water.

Gary King (Pegg), once the self-styled ‘king’ (see?) of the fictional small town of Newton Haven as a teenager, is now a selfish hedonist unable to let go of his youth or to stop drinking. Gary is desperate to relive a famed pub crawl known as the Golden Mile, which he first attempted with his four school friends one night back in 1990. He perceives the night as both the best of his life and also a failure for not making it to the titular pub – the twelfth and final establishment on the crawl.

So, out of touch with his old friends and living in a bedsit, Gary decides that persuading everyone – despite their reticence – to return to the town 20-odd years later and complete the Golden Mile once and for all is the only way to move forward and turn his life around. Yet when they get back to their hometown, everything seems eerily the same as it was two decades ago, but also different somehow. This, it turns out, is because Newton Haven has secretly become the headquarters of beings that have quietly taken over the entire world, which threatens to stop the five friends completing their pub crawl once again.

Throughout, director Edgar Wright as ever captures the essence of small town life in the UK, adding to it the sense of familiarity with homely surroundings but a feeling of otherness, which many who have moved away from their hometowns will recognise. He and Pegg’s script also affectionately sends up the eccentricities of British pub culture and the shotgun dialogue, chock full of one-liners, carries the momentum all on its own for the first 45 minutes. After this, though, plot and action start to take the front seat, and it becomes more apparent that stylistically, thematically and plot-wise, (spoiler alert) this is the exactly same film as Shaun of the Dead. A refreshing formula back then maybe, but nearly ten years later, not so much.

There’s an all-star cast, but they too add nothing new. Pegg is a charming arsehole as Gary King and Frost as his old best friend Andy also has some amusing moments. But the most notable performance results from its relative absence – as Paddy Considine, with little to work with as another of the pub crawlers, gives his most forgettable appearance onscreen since, well, ever. The same could be said for Rosamund Pike , although her character Sam being dull as dishwater hardly sets her apart from the female characters in any of Wright’s other films. Martin Freeman, meanwhile, plays Martin Freeman (AKA Oliver, another of Gary’s old friends).

Like old friends who know each others’ anecdotes all too well, maybe the familiarity between Wright, Pegg and Frost is stifling their ability to come up with new ideas, because there just aren’t any in The World’s End whatsoever. It’s tempting to suggest they try calling on old collaborator Jessica Hynes (nee Stevenson) – a major factor behind the success of the sitcom Spaced – before they decide to get together again in the hope of stirring things up a little. But then, perhaps it is a little unfair to criticise a comedy film which does, crucially, provide a bit of entertainment and a few laughs. After all, that’s what average comedies are supposed to do.