The Wicker Man: The Final Cut
The 40 year anniversary of The Wicker Man is being celebrated with all the bells and whistles

When a young girl mysteriously disappears, Police Sergeant Howie (Woodward) travels to a remote Scottish island to investigate. But this pastoral community, led by the strange Lord Summerisle (Lee), is not what it seems, as the devoutly religious detective soon uncovers a secret society of lust and pagan blasphemy. 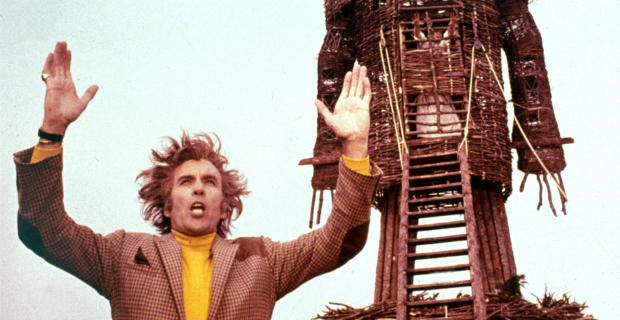 Even if you’ve never seen The Wicker Man, you probably know how it ends. In my case, I knew how it ended before I’d ever seen an actual horror film, before spoilers were a thing, and perhaps even before the word spoiler had been coined; which goes to show how far a mangled B-movie has permeated Britain’s cultural atmosphere in the past 40 years. It’s now being celebrated with a 3 disc ‘final cut’ DVD release, complete with all the bells and whistles due to a film with a reputation that towers like a flaming man-shaped picnic basket. Modern audiences who come to the film fresh may find its low budget artiness a little kitsch, the scares a little distant, but there’s an uncanny quality to  The Wicker Man that lingers in a way that many more straightforward horrors can’t match.

Sergeant Howie (Edward Woodward) travels to Summerisle, a remote Scottish island, to track down a missing schoolgirl. The locals maintain that they know nothing about it,  and lay on some jolly diversions – the inn hosts an array of roistering drunks and bawdy singers, who seranade the landlord’s nubile daughter (Britt Ekland) whilst she deflowers a virgin village boy upstairs. Howie, a puritanical Christian, is repulsed by these goings on – and that’s even before the sexy snails, phallic symbols and oddly knowing children appear. His revulsion grows as it becomes clear that the community’s ‘enlightened heathenism’ is institutional, nurtured by the patrician Lord Summerisle (Christopher Lee).

Meanwhile the joyful islanders lure us in, and there are giggles to be had in watching a kind of proto-Peter Hitchens beetling about attempting to repress the lusty urges of a late-blossoming Sixties rural Scottish utopia. Part of the film’s genius is that this comic tension belies a more sinister social tension between the rigid superego and an antic id, and these psychological missiles hit their target. The famous finale is gruelling to watch, and raises some interesting philosophical questions around religious fanaticism that resonate even now. Sure, the film has its flaws – its poorly dubbed, has rickety sets and plenty of stilted lines. But the core elements are excellent – particularly Anthony Shaffer’s mischievous script and Peter Giovanni’s haunting folk score.

Ironically for a story that takes a dim view of cults, The Wicker Man has attracted one of its own and it’s easy to trace descendants amongst the output of Ben Wheatley, Edgar Wright and the League of Gentlemen, to name a few. The extras in this DVD release offer a pleasing amount of detail on the film’s history, with extras that look at its rather tortured production, its legacy and its music. The 2001 doc ‘Burnt Offering’ is the best of the bunch, featuring delightfully gossipy accounts from the original cast and crew, and Mark Kermode hamming it up in ‘sinister film historian’ mode.

Watching the latest cut and these extras in one sitting serves as an enjoyable reminder of The Wicker Man’s eccentric charm and power, shoring up its status as a hurriedly assembled myth that managed to reflect the anxieties of post-Sixties Britain (and in still chilling us, tells us a fair bit about our own).