The Social Network
It’s about a phenomenon so recent that we’re still living it, and one that has percolated down to how we relate to our peers on an everyday level, whether we like it or not.

Harvard student Mark Zuckerberg creates the social networking website that would become known as Facebook, but is later sued by two brothers who claimed he stole their idea, and the co-founder who was later squeezed out of the business. 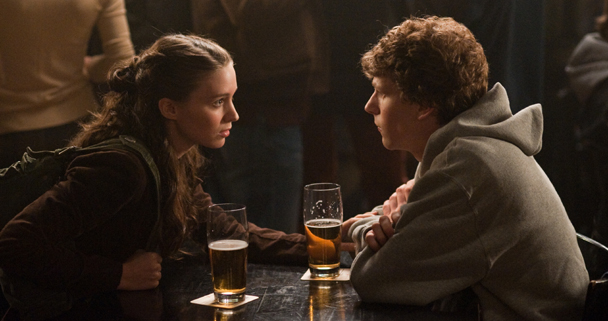 At home, before I went to see The Social Network, I had to take a moment to clear my Facebook status so that my distant acquaintances don’t think that I’m into certain unsavoury sexual practices, and oversharing (thanks housemates!). On the bus to the cinema, I sat near a girl who loudly reviewed her male acquaintance’s Facebook pictures, for the benefit of her friend. After the screening of the film itself, a man approached me as I left the cinema, asking breathlessly: “have you been to see The Social Network?!” Um, yes, thanks for asking…

Clearly The Social Network is not your average film. It’s about a phenomenon so recent that we’re still living it, and one that has percolated down to how we relate to our peers on an everyday level, whether we like it or not. There’s something surreal about watching a creation myth about a zeitgeist that blossomed about five minutes ago, and was invented by people roughly the same age as the average audience member.

The film opens with a bar-room argument between a fast-talking, arrogant nerd and his soon-to-be ex girlfriend. He heads back to his Harvard dorm angry and alone, and during the ensuing drunken coding session, he creates Facemash, a chauvinistic website where male students get to rate the looks of their female co-students. Needless to say, our introduction to Mark Zuckerberg (for it is he, played with wit and intensity by Jesse Eisenberg) is not intended to win us over, and our hacker anti-hero is soon at the centre of a storm entirely of his own creation

There is something brilliantly American about the whole concept of Facebook – i.e., as a forum for selling one’s ultimate brand: oneself – and this theme is echoed in the film. As Zuckerberg puts it at one point, the commodity he has marketised is the hazy concept of ‘coolness’. Archetypal alphas – the hugely blond and all-American Winklevoss twins – are thwarted, whilst the maladjusted hacker is victorious.

A parallel contrast comes from being shown hoodie-clad college boys huddled round a computer enjoying coder’s camaraderie, before cutting to a later, more litigious scene where they are seated at a boardroom table, wearing suits, thoroughly equipped with seasoned lawyers and icily referring to each other as ‘Mr’ this and ‘Mr’ that. The comedy in such juxtapositions is skilfully harnessed by scriptwriter Aaron Sorkin, who also revels in the irony of Zuckerberg’s wide-ranging misanthropy and conflicting desire for social acceptance. The Social Network isn’t billed as a comedy, but is actually far wittier than most films which do claim that label.

At base, this is the story of a boy’s shift from adolescence  to maturity and given a modern spin – and the youth of the protagonists gives a fresh edge to the study of male status and cast-aside loyalties. To use the coder’s parlance, this is about beta-mode teenagers attempting to operate at an alpha level, and with mixed success.

However, one side effect of examining the gaucheness of male youth at such length is that we only really see their slightly skewered vision of the other sex. This is a film about male bonding, and the women in the film are presented as rewards for those who succeed, rather than people in their own right. Only one girl has any intelligent dialogue or character; the others dispense blowjobs and drape themselves prettily around their sugardaddies. Such is life in the business world perhaps, but I’d be interested to see Fincher direct a film that isn’t about all about men for once.

Speaking of Fincher, however, from the very start The Social Network is directed with his customary technical brilliance. Harvard is chilly and gloomy, filmed in long tracking shots that encapsulate the social stratification of the university. A later scene takes us to Henley-On-Thames for the Winkevoss twins’ entry in the Royal Regatta, and this is filmed in a suitably showboating manner. The camera’s depth of field is reduced to mere centimetres, and the peripheral world around the rowers is reduced to an insignificant blur: we share their intense focus as they struggle to reach the finish line first. It’s as if Fincher wants us to feel the sense of dynamism and ambition that drives each of the characters in the film, and his success in meeting this aim makes the scene a memorable piece of cinema.

The silicon valley legend, founder of Napster and early champion of Facebook Sean Parker is played by Justin Timberlake, of all people. It’s a curiously effective piece of casting: here Parker is a waxen, overly slick party-boy coasting on past successes, and Timberlake takes on the part with gusto, transforming his popstar charm into something far more oleaginous. When Zuckerberg destroys his own chance to be accepted by the mandarins of Harvard, Parker is the man who shows our anti-hero the alternative elitism of glamorous California.

Occasionally the fraught tone of Sorkin’s script, combined with Nine Inch Nails frontman Trent Reznor’s moody score, gives the impression that all involved look upon the invention of Facebook as an event of magnitude equal to the beginning of a world war: Sorkin cites Agamemnon and Shakespeare’s Julius Caesar as literary predecessors to, er, his interpretation of Mark Zuckerberg. Easy there, Aaron…Still, such ironically Classical hubris is easily ignored when the final cut of the film is as enjoyable as this one.

The Social Network is both a fiction for and a document of the 21st century’s first influential generation. It tells a story which, if not fabricated, is at the very least, generously embellished – but it also realistically reflects back to us how technology has the power to deepen our latent compulsion for controlling our own narratives, at the expense of our personal relationships. This is a challenging subject to tackle onscreen without resorting to sensationalism, and the creators of The Social Network deserve extended applause for creating a nuanced and engaging study of our fascination with fragmented social interaction .