The Internship
Google may not be evil but they clearly have no problem being shameless.

Billy (Vince Vaughn) and Nick (Owen Wilson) are salesmen whose careers have been torpedoed by the digital world. Trying to prove they are not obsolete, they defy the odds by talking their way into a coveted internship at Google, along with a battalion of brilliant college students. But, gaining entrance to this utopia is only half the battle. Now they must compete with a group of the nation’s most elite, tech-savvy geniuses to prove that necessity really is the mother of re-invention. 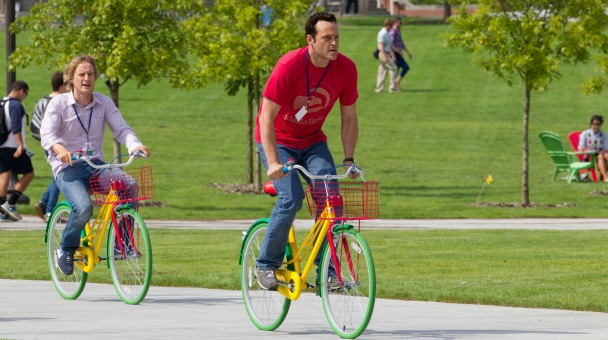 GoogleTM. The best workplace in the world. There’s self-driving cars, dangling spaceships and spiral slides to help you get downstairs (Bing probably don’t even have a fireman’s pole). There’s as much free food and drink as you can take. It’s a chocolate factory for tech nerds; a constant all-you-can-eat buffet of incredible staff benefits. AskJeeves must be spinning in his internet grave. But it doesn’t end there. There are nap-pods, multi-coloured bicycles, a dry-cleaning service and a quidditch pitch. A QUIDDITCH PITCH. Seriously.

Forget about their questionable approach to corporation tax or the NSA spy scandal. Forget they know more about you than your own family. Forget they know much more than your average hacked phone. Forget that they OWN YOU. Because they have a really nice office. And somewhere amongst this elaborate HR video and brazen PR initiative, there’s a film going on.

Owen Wilson and Vince Vaughn are two middle-aged men who’ve been hit hard by the economic downturn. Both of them struggle for an income; Wilson is working for his pervy brother-in-law (Will Ferrell) in a mattress shop, Vaughn’s business has been foreclosed and his sales work has dried up. When he GooglesTM jobs, a student internship programme at the search engine giant appears so they enrol to the University of Phoenix – “the Harvard of the online institutions” – and one Google HangoutTM later, they’re placed into a group of young oddballs vying against hundreds of others competing for a full-time position. But they know not enough of technology, and way too much about 80s films, specifically Flashdance.

There are some interesting themes at play; a recession-hit pre-internet generation in need of a new skillset to make a living in an increasingly digital age, and hundreds of students competing against each other for the benefit of big corporations. In this instance, it’s not clear if the interns are paid – if they’re not then a myriad of issues around affordability, privilege and exploitation open up – all of which are not good fodder for a frat-pack comedy film so the area is left alone.

Wilson and Vaughn remain strong screen presences and are relatively funny, if not in a laugh-out-loud way. Their more interesting scenes involve them struggling to fit in with a smarter, much younger crowd. After the team competitions (a plot almost exactly the same as its box office rival Monsters University), the romances, the Flashdance-inspired pep talks and the drawn-out scenes of drudging, monotonous dialogue, they still have time to master CSS++ and other sophisticated technical skills for the first time.

Max Minghella is picked up from being an smarmy bad guy in The Social Network and dropped in here with an English accent to similar effect. Rose Byrne and The Daily Show’s Aasif Mandv are good in supporting roles and there are some genuinely warming scenes but the group of misfits is a bit too contrived to produce anything of substance. So the film relies on cheap laughs when it could’ve done clever laughs and no-one is really laughing at the cheap ones anyway. The result is a GoogleTM-commissioned A-list training video. The end credits, whilst cleverly put together, are literally a showreel of GoogleTM products; GmailTM, YouTubeTM, ChromeTM, StreetviewTM, Google docsTM, Google imagesTM, Google translateTM, Google MapsTM, Google DriveTM, Google HangoutsTM, Google circlesTM, Google searchTM, Google+TM , GoogleTM, GoogleTM, GOOGLETM.

This isn’t The Internship. This is Google: The MovieTM – another asset on their list of trademarked products. GoogleTM may not be evil but they clearly have no problem being shameless.