The Artist
It is an homage, it is a paean, it is a celebration: a behind-the-screen romantic comedy that fully embodies the glory and goofiness of a neonate film industry.

A silent movie star meets a young dancer, but the arrival of talking pictures sends their careers in opposite directions. 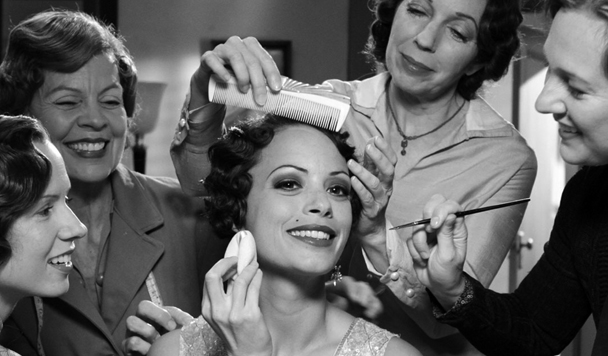 George Valentin (Jean Dujardin) is a massive movie star (equal parts Clark Gable and Gene Kelly, with lashings of William Powell, and a generous dollop of John Gilbert) in the silent golden era of Hollywoodland.  He, along with his trusty canine co-star (heapings of The Thin Man and Sandy, a dash of Rin Tin Tin, and a soupcon of Umberto D.), is the king of Kinograph Studios, appearing in swashbucklers, lavish prestige pictures, and jungle epics.  He meets cute Peppy Miller (Bérénice Bejo), an aspiring actress (gobs of Clara Bow, Janet Gaynor, and Ruby Keeler, add Paulette Goddard to taste), whom he helps on the way to stardom, giving her the grease pencil beauty mark that will set her apart.  Unfortunately, this is the dawn of the talking picture, a time of ‘out with the old and in with the new’ when, according to Zimmer, his producer (John Goodman, hilariously foul-mouthed, to those who can read lips), ‘the public wants fresh meat, and the public is never wrong.’  George, proud and stubborn, finds that his brand of daring-do and Fantomas-like hijinx have become antiquated overnight.  Peppy’s star, however, is on the rise.

Michel Hazanavicius’s The Artist is an affectionate and lustrous wet kiss to Hollywood.  It is an homage, it is a paean, it is a celebration: a black and white silent film about black and white silent films, a behind-the-screen romantic comedy that fully embodies the glory and goofiness of a neonate film industry.  Well, it’s mostly silent; Hazanavicius is exuberantly playful with the whole medium of motion pictures, and some of the cleverest and funniest moments are when he toys with the notion of silence in movies.  His attention to detail is as keen as any ardent suitor’s: when George is replaying his old films in the new era, they are slightly too fast, comical—indeed, as we see silent films today—because they were made before the standardization of 24 frames per second that was necessary in order to have synch sound.

A big glorious pub quiz of a movie (warning: if ‘classic movie’ makes you think of Dirty Dancing or The Breakfast Club, you may be immune to this film’s charms) there are whispers of Singin’ In The Rain (more of a yell, really), the Busby Berkeley back catalogue, Lost Weekend, Citizen Kane, Sunset Boulevard, Laura, Chaplin, Astaire and Rogers, Harvey, and countless others.  It’s hard not to use the words ‘affectionate’ (I lost that battle) or ‘love letter to cinema’ (my resolve did not crumble), but it is just that, a compendium of homage and tribute and gentle spoof.  But it is also fresh and sharp and witty in its own right with some ingenious touches, as when we see George and Peppy fall in love through the rushes of A German Affair, a series of takes where their chemistry blossoms and the script is forgotten.  It is, fundamentally, a love story—not between George and Peppy (we saw that coming before the first reel change), but between Hazanavicius and cinema, and between the audience and The Artist.