Tangled
The contemporary colourful characters and enjoyable tunes will win over many once more.

The magically long-haired Rapunzel has spent her entire life in a tower, but now that a runaway thief has stumbled upon her, she is about to discover the world for the first time, and who she really is. 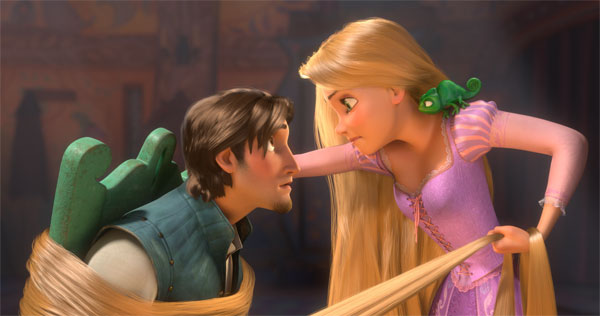 The story of Rapunzel is a time-old tale about a girl with lengthy golden hair who is imprisoned in a tower by a wicked sorceress, until a passing prince hears her singing and rescues her. Once upon a time, Disney would have kept firmly to the original script.

But times have changed, and like many fairy tales that have been spruced up for the contemporary audience, Tangled tweaks the tale so that Rapunzel is no shrinking violent with a magical mane, and her prince is a thieving scallywag called Flynn who stubbles upon her tower, whilst trying to flee the law after a jewel heist. Even though it sounds like Disney has killed all the innocence, it still has its charm, and is all done with a tasteful and healthy dosage of good humour that’s geared towards adults and kids, hence makes for great family viewing.

Tangled is yet another excuse for charging 3D ticket prices, though, enough to break the bank. To be honest, nothing is lost if the story is seen in 2D as there’s enough to keep everyone entertained. Disney has also retained the look and feel of its beloved hand-drawn style but tonally fleshed it out with the latest wizardry to give it depth, even without the 3D. That said the dreamy lanternscene in the boat between Rapunzel and Flynn is certainly more powerful in 3D, with the technology put to good effect to draw audiences further into the scenery and the tale. There is also a stunning use of light, too, like a symbol of hope and enlightenment to all, especially Rapunzel and her coming of age.

Thankfully, unlike recent animations (Princess and the Frog, for example), there are no talking animals, therefore, no reason to have teeth-grindingly annoying B-list comedians lending their voices, and thinking they’re funny. The animals still have humanistic qualities and expressions, including Rapunzel’s companion and guardian chameleon, and a proud and by-the-book horse called Maximus who matches the wit and strength of any human counterpart, and provides many surprising laughs as he kicks Flynn into touch, before watching his back.

The evil Gothel still hampers after the magical flower, but his time it’s given to the dying Queen, and its power past onto infant Rapunzel from birth, and into her wayward hair, providing the hag with a reason to abduct the child and harvest the hair’s youthful spell. Ulterior motive aside, Gothel is portrayed as an overbearing and smothering mother in Tangled who cannot cut the apron strings, and is also sinisterly competitive and jealous of her ‘child’s’ youth, beauty and future opportunities. It’s an intriguing analogy that will hit home with some watching.

Fairy tales are there to be adapted, as long as the crux of the original is still beating at its core. Tangled is one such film, and with its contemporary colourful characters and enjoyable tunes will win over many once more, like the story did the first time around.