Shame
As McQueen says, ‘Morality is like socialism, great idea but it doesn’t bloody work.’

Brandon is a thirty-something man living comfortably in New York balancing a busy job and an active social life. When the wayward Sissy, turns up at his apartment unannounced, Brandon's carefully managed lifestyle spirals out of control. 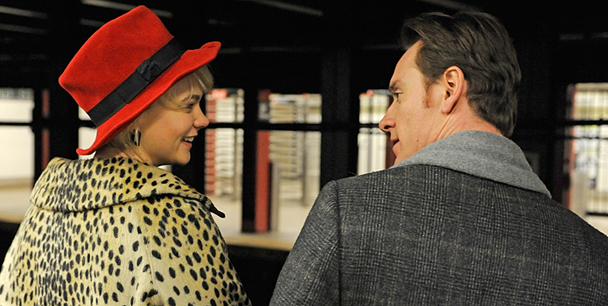 Steve McQueen’s second feature is a merciless exploration of the frigid soul of a sex addict named Brandon, a successful—professionally and personally—New York City predator.  He’s almost as obsessive as he is compulsive, his uptown apartment as sterile and uncluttered as his heart.  Brandon’s life shares a zip code with Patrick Bateman’s (American Psycho), although his condition is by a margin saner—if, that is, you make the moral distinction that sex addiction without actually murdering people is saner, although, I believe, there’s of the same cluster in the Diagnostic and Statistical Manual IV (but I could be wrong, I’m only an amateur). Michael Fassbender—with the sinew and smoulder to fully create the modern urban beast of prey—plays Brandon and his days are spent with internet porno, self-gratification in public toilets, hookers, and back alley rutting—this is human connection at a basic level, without any humanity.  Thank God this isn’t an issue movie—a crusade-for-help-for-an-afflcition-that-needs-sensitive-treatment-but-isn’t-quite-a-registered-charity-yet movie—but an apt metaphor (as was American Psycho) of the heartless vacuity of gleaming modern New York life.  McQueen and co-screenwriter Abi Morgan (both British) perfectly capture the vapid corporate cliché and paranoid camaraderie of New York business world, where you’re only as good as your last bloodless deal.  Sex is just a part of that (Morgan and McQueen talk about the ‘access and excess’ of sex these days—‘It’s just two clicks away,’ McQueen says), no more no less than the day trading and short sells (fast thrills, no conscience).

Graphic, hard, and unsentimental, Shame is a visually stunning film, visceral and captivating, if a little obvious in the point points used to trigger Brandon’s self-reflection or the road signs to redemption (Cissy’s own brand of self-destruction).

It is, ultimately, moralistic?  It seems so.  The title, after all, is ‘Shame.’  And—uncomfortably—Brandon’s bottoming out is to go to a gay sex club, as though—good God!—can he sink that low?  Hetero sex addiction is not enviable, but still kind of sexy and rogue-like, but resorting to gay sex is to land in Dante’s inner circle of hell.  But, as McQueen says, ‘Morality is like socialism, great idea but it doesn’t bloody work.’