An underwater cave diving team experiences a life-threatening crisis during an expedition to the unexplored and least accessible cave system in the world. 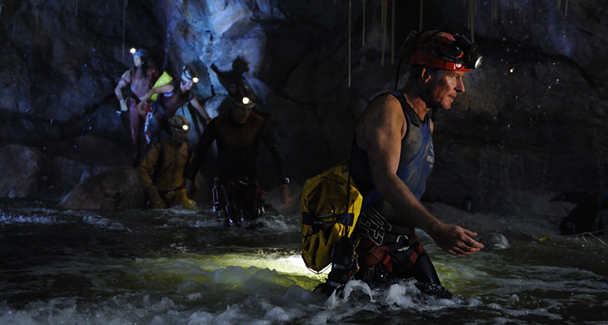 Mr Cameron has a penchant for setting dramas deep underwater – he did it in The Abyss, he did it in Titantic, and here he does it in Sanctum. Unlike most exec producer top-billings, Cameron seems to have had his hand firmly on the tiller for this particular project – he mentored the director, Aussie newcomer Alister Grierson,  and pressed his own Fusion 3D camera technology upon him. Still, the main reason we know that Sanctum is Cameron’s work is the nursery-level simplicity of the story. In Titantic, we had the forbidden rich girl-poor boy love affair; in Avatar, the eco-warriors versus corporate monsters. Here we have an unsubtle take on troubled father-son relationships. Happily for Cameron, his writer-director team wouldn’t know nuance if it hit him in the face.

The result is a hilariously awful, wildly entertaining survival melodrama. The story is told through Josh, a seventeen year old Australian (played by Home and Away alumi Rhys Wakefield) who reluctantly spends one month of every summer with his estranged father Frank (Richard Roxburgh). Frank is a world-renowned cave diver whose current project is to explore the subterranean caves of Papua New Guinea. Josh escorts the project’s backer, cocky billionaire Ioan Gruffudd (a budget-edition Tom Cruise), and his girlfriend Victoria (Alice Parkinson) down into the cave.

Things go awry quickly but it’s a tropical rainstorm that seals the deal. Trapped in the caves with quickly rising water, the band of diver-explorers must swim into the labyrinth in hope of finding a new escape route. They have limited air and food supplies, no idea where they’re going, and Frank’s fanaticism for survival at all costs disturbs the group dynamics. Mild peril is soon upgraded to ‘extreme’.

And most things about this film are extreme. The vertigo-inducing 3D is extreme. The life or death situations are extreme. The expendable stock characters are extreme, as are their inevitable demises. Most extreme of all, however, is the exquisitely cheesy dialogue – such as “Life’s not a dress rehearsal, you’ve got to live for today!” or Frank’s portentous recital of Coleridge’s Kubla Khan lines pertaining to “caverns measureless to man”. In Sanctum, the Chekov’s gun rule for drama is wielded so clunkily that it could be re-named Josh’s Torch-Necklace (you’ll see what I mean).

Everyone emotes uncontrollably: Victoria screeches “Fuck that!” to various survival stratagems, Frank declares that “there’s no God down here!” and Gruffudd chews the scenery with hammy abandon. The hazards of their predicament are fully exploited – I wouldn’t recommend this for claustrophobics – and Sanctum is shockingly grisly. There are drownings, severings and even a weird, undeveloped (possibly edited?) hint at cannibalism. After one particularly graphic death scene I was emoting almost as much as the characters, though my primary reaction was incredulous giggling rather than anything more heartfelt.

The simplistic storytelling and sentimental tone of the latter half is laughable, but aside from the silliness this is a well-shot and appropriately gruelling film with some dramatic set-pieces. The ‘inspired by a true story’ element is tenuous at best – the scriptwriter once got saved from a cave-diving expedition – but that tacked-on gravitas is hardly important. Sanctum is designed for rowdy group outings to the cinema and, as a daft adventure movie, it kind of works.