Salute
On the podium at the 1968 Mexico City Games, African-American 200m medallists Tommie Smith and John Carlos raised their fists in a controversial ‘Black Salute’ protest, making one of the most powerful and iconic images of the 20th Century.

Salute tells the true story behind the iconic image of American athletes Tommie Smith, John Carlos and the Australian silver medallist Peter Norman - three Olympic competitors who, in one peaceful but inflammatory moment of political protest as they received their medals on the podium, would destroy their sporting careers and become a seminal and enduring symbol of the Civil Rights struggle. 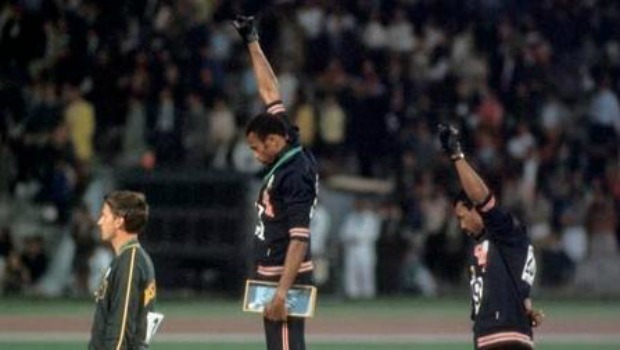 With the Olympic Games now well underway, any prior pockets of British cynicism have inevitably crumbled to ambivalence under the barrage of media coverage of Team GB’s successes. TV schedules full of life-affirming documentaries showcasing sporting spirit and endeavour past and present were irresistible, if a little suffocating. But not every Olympic story has a happy ending, and not every daring moment of human sacrifice and achievement is given its due recognition or support, as this fresh if not entirely successful documentary film shows.

On the podium at the 1968 Mexico City Games, African-American 200m medallists Tommie Smith and John Carlos raised their fists in a controversial ‘Black Salute’ protest, making one of the most powerful and iconic images of the 20th Century. The third man on the podium was Peter Norman, who unexpectedly split the two Americans earlier that day to win silver and set an Australian record of 20 seconds flat. He wore a human rights badge of support for his fellow medallists, and as a result was never allowed to represent his country at an Olympics again. Yet, some six years after Peter Norman’s death, his astonishing achievement remains unbeaten by any of his countrymen, and celebrated by few.

To analyse the context and tragic consequences of that iconic moment, Salute pulls together various interviews with the three athletes recorded before Norman’s death in 2006. Yet, a moment – a snapshot – is what it is, and while Salute tries its best to make up for the lack of visual stimulation to carry it through 90 minutes, it’s clearly an uphill struggle for director Matt Norman.

It’s unfortunate, because the subject matter is interesting and, largely, previously unexplored. It’s lovingly put together by Norman, too, as befitting a film about his own uncle, but cohesion is sacrificed somewhat by a cobbled-together set of interviews with the three protagonists in disparate places both individually and collectively.

Peter Norman himself is so utterly humble, down-to-earth and modest that he’s an almost boring interviewee. But that he is so unassuming in the face of such praise from his fellow medallists makes him beguiling. Here is a man that came from nowhere to set an incredible Australian record, yet has no bitterness or regret for either his podium actions or the way he has been treated by his country. He doesn’t come across so much a brave, passionate campaigner for human rights either – more a normal guy in the right place at the right time to do the right thing – which somehow makes his actions all the more powerful.

However, it’s telling that the most engaging parts of the film focus on the 200m race that started it all, rather than the infamous events on the podium afterwards. As we’ve seen in the countless aforementioned documentaries building up to London 2012, hearing athletes talk passionately about their sporting achievements and sacrifices pulls a hefty emotional punch, and Salute is no different. Interspersed with footage of the race itself, this part of the story is genuinely thrilling, but sadly very little else on screen boasts such relevance.

Considering Peter Norman was still not invited by the Sydney Olympics authorities to attend the opening ceremony of the Sydney 2000 Games – an event that famously saw Aboriginal athlete Cathy Freeman light the Olympic flame as a symbol of modern Australia – this is an important film. But in the end, what could have been an excellent short film or radio documentary, has made for a worthy, if flawed, full-length feature. Norman instead attended the ceremony as a special guest of the USA, a country in which his badge of support was unforgotten by younger athletes including Michael Johnson. Smith and Carlos are even shown carrying Norman’s coffin at his funeral in 2006, emphasising the high esteem in which Norman is held in America.  It just a pity his own country has never given him such recognition.