Rio
Anne Hathaway and Jesse Eisenberg soar as feathered and tethered lovebirds on a quest to save their species in this beak-chic rom-com.

Blu is a rare macaw who leaves the comforts of his cage in small town Minnesota for the exotic wonders of Rio de Janeiro. But Blu’s new life and adventures in Rio are complicated by the fact that he can’t fly. Lucky for Blu, his new menagerie of friends are ready to help him find his inner-hero – and teach him what it really means to soar. 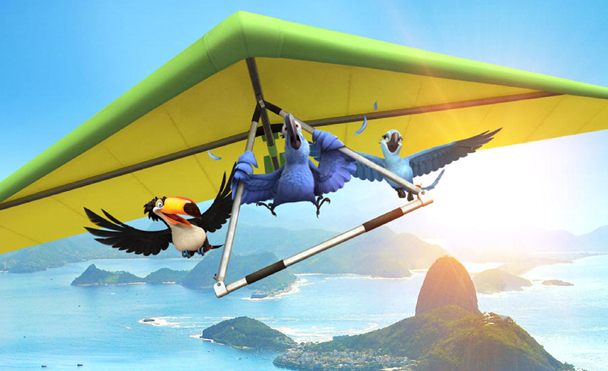 There’s a lot of money to be made in animated films, if done right. One thing –chances are, the only thing – you’ll remember about the Ice Age trilogy is that funny little rodent chasing his beloved acorn. Awww, cute. What you probably don’t remember is that the final instalment Ice Age: Dawn of the Dinosaurs took nearly $900 million worldwide, putting it well within the top twenty highest-grossing films of all time. Ignoring US revenue, it stands as the fourth highest. Suddenly that rodent looks a whole lot cuter. Or perhaps not. Either way, 20th Century Fox were in on the joke, and Rio is their latest foray into the hearts – and pockets – of movie-going families the world over.

Fox clearly see no point in altering a winning formula. Carlos Saldanha directs, as he did the three Ice Ages, and he is obviously a trusted captain for this money boat. One thing that has changed is the casting; where Ice Age had reliable character actors such as John Leguizamo and Ray Romano, Rio has gone for much bigger guns. Younger too. Anne Hathaway and Jesse Eisenberg are two of Hollywood’s biggest starlets and they are really quite good in this film. The reversal of usual gender stereotypes in adventure flicks – him as the domesticated American wimp who can’t fly and her as the Indiana Jones style adventurer teaching him the ways of the wild – suit the actors’ current casting to a tee. They both enhance their reputations in this stint in voiceover, which certainly can’t be said of every star.

Topping them though is Flight of the Conchords’ Jemaine Clement as Nigel the ex-celebrity Cockatoo hell bent on making every bird he meets as ugly as he has become. He has some great one liners (‘Like an abandoned school, I have no principal’) and a menacing New Zealand accent, and his Conchords-like signature song makes Scar’s Be Prepared from The Lion King seem, well, just so 1994. Kids’ films have moved on since then, and not just in terms of how their enhanced CGI can make every shot so detailed and gorgeous, especially when – like Rio – in ‘eye-popping’ 3D. The formula has been adapted significantly, led by Disney’s competitors, and Rio stands as a classic example of how and what has changed.

The trick continued with this film – from precedents like Ice Age and Dreamworks’ Madagascar franchise – is that the comedy supersedes any sense of dread or peril. Every set-piece or chase in Rio that could be dangerous or scary for kids is tuned more towards the wow-effect of the 3D CGI, or comedy veering towards the slapstick. After all, this isn’t Disney, and not every film aimed at young’uns needs the pathos of Toy Story or the melodrama of Pocahontas and Mulan. It all started with Shrek, an ironic and high-comedy romp which was silly as well as sweet. Adults, if being honest with themselves, love these two ingredients just as much as their children and Rio marks the point where parents can rest assured knowing neither they or their kids are going to be patronised. Everything is just right.

Even if it is ‘just a kids film’, I was helpless to resist laughing – quite a bit – watching Rio. The characters were clever, it looked amazing, the set pieces were incessant and perfectly executed and it was funny. It wasn’t perfect, of course; no matter how nice a touch including a side story about the dilemma of being a Rio favella orphan was, it doesn’t excuse the amount of American accents to be heard in the Brazilian samba city. Also, as currently hip as it may be to have will.i.am autotuning a couple of ditties (with smooth Jamie Foxx as a pair of street smart birdies) it doesn’t mean that said tunes are any good. Maybe this film won’t last the test of time, but expect it to do very well indeed. And you know what? It just about deserves to.