Prometheus
It’s 2093, and the crew of the Prometheus are woken from cyrogentic sleep to begin their mission to find mankind’s creator on a rocky planet.

A team of explorers discover a clue to the origins of mankind on Earth, leading them on a journey to the darkest corners of the universe. There, they must fight a terrifying battle to save the future of the human race. 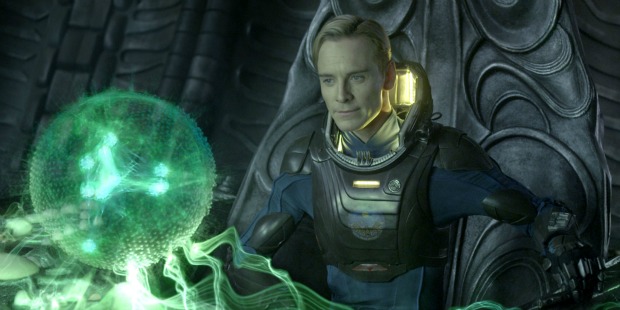 Director Ridley Scott was quoted as saying that Prometheus was a film that would ‘stand on its own’, apart from the Alien series. It’s fair to say that the sweeping, opening 3D vistas and alien mutation on the IMAX screen are truly spectacular to watch, so there is a lot of genuine expectation from the start – and for the newcomer, it’s quite a show of effects prowess to be initially engulfed by.

But as the film goes on, the grand, industrial production design is almost like a sci-fi distraction to the riddles the narrative throws up. It’s comparable to an annoying rhetorical inner self, constantly questioning and re-questioning Man’s origins, with no feasible conclusions, and instead favouring falling back on the same, lame biblical and mind-bending one of the ultimate creator being a deity. Perhaps a second viewing is necessary to grasp all the ideas that fall under the ‘science verses religion’ label, complete with obvious Darwin and Christianity connotations.

It’s 2093, and the crew of the Prometheus are woken from cyrogentic sleep to begin their mission to find mankind’s creator on a rocky planet, headed by archaeologists Shaw (Noomi Rapace) and Holloway (Logan Marshall-Green). Behind the scientific purpose is a darker ulterior motive yet to be revealed that only the ship’s super efficient humanoid, David (Michael Fassbender), seems to hold the clues to. However, while exploring the site, the crew that also includes company spokeswoman Meredith Vickers (Charlize Theron) and loyal, renegade captain Janek (Idris Elba) encounter a terrifying alien secret. They must battle to save the future of the human race back on Earth.

Ridley is more about exploring the Darwinist theories here, rather than staging epic, squelch-fest battles of latterAlien films. Fire is the biggest threat to all – much like for primitive man, and the analogy is not lost. That said there is still enough wonderment at the genetic composition of the alien species that takes on a different form in this to thrill fans – the problems lie in the lack of a decent explanation as to the true effects of the tar-like DNA matter and its engineer.

Ridley needed a contemporary Sigourney Weaver, someone who combines courage with empathy. Athletic Rapace delivers anxiety, vulnerability and grit determination simultaneously – also present in her Girl With a Dragon Tattoo portrayals. Her strong performance as Shaw in this helps keep the status quo on some meaningful track when all else gets blown into the metallic ether, or fails to amount to much else than visual awe: Included in the latter statement is Theron who knows how to play the stunning ice maiden but is allowed little else to really sink her teeth into in this, apart from one reveal that leads nowhere for her character.

Nevertheless, it’s Fassbender who ultimately steals the show as David, a Peter O’Toole lookalike in a space jumpsuit with an eerie sociopathic tendency, unconditionally serving a ‘higher being’ but keeping us guessing as to possessing any real feelings as such. This both works in the character’s favour and against, which is where lies another of the film’s flaws; could such a manmade creation indeed be capable of developing free will, aside from following his programme. Still, this is another Bishop origin pointer for Aliens fans, as well as neatly emphasising man’s ironic reliance on technology for survival.

The biggest frustration in what is a stunning, visual sci-fi feast – a must-see at the IMAX – is the plethora of possible ideas that detract from making Prometheus a tighter-scripted, latter-day blockbuster worthy of challenging the 1979 film. Its commercial slant that the earlier film sardonically defied is made more apparent by the odd quips to lighten the mood, hence defusing any whiff of mounting tension. Without the claustrophobic space of the other films, the pressure cooker effect is sorely absent in this, with the only feeling of entrapment being the lack of oxygen on the planetary surface. Still, Ridley coaxes out some memorable performances from Rapace and Fassbender, and keeps a consistent sense of man’s curiosity at the bigger evolution picture, which fuels the film’s own fire. The rest is open to interpretation.