Rose Pamphyle, 21, is determined to break free from her stifling existence. Living with her widowed father and dreary husband, she seems destined to remain a bored housewife. That is, until she applies for a job at an insurance agency and her charismatic boss offers her a job - provided she compete in a speed typing tournament. 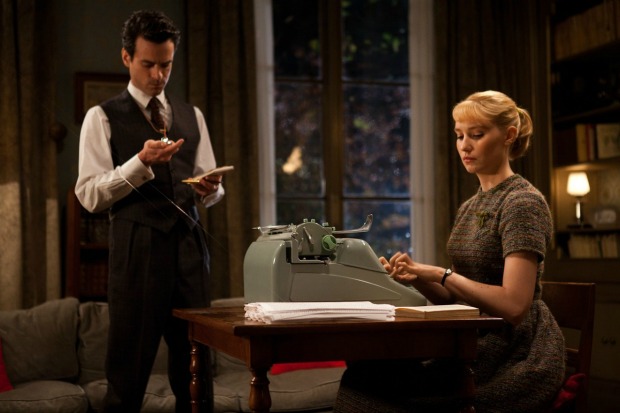 Populaire has been billed as Mad Men meets The Artist, a sure hook for those of us already well-disposed towards throwback glamour and subtitled French films. There’s plenty of allure: gorgeous sets and styling, an attempt at critiquing chauvinistic attitudes, and an amusing pastiche of high-stakes sports films, but there’s a vaguely unpleasant undertow to it all that belies the canny nouvelle-retro marketing.

The clean-cut atmosphere of the late 1950s syncs with a provincial setting – Rose leaves her village for the bright lights of, er, a town in deepest Normandy in search of a glamourous job, a dashing boss and lots of international travel. She is one of many other would-be secretaries at a job interview, but her gamine looks and speedy one-fingered typing catch insurance manager Roman Duraris’s eye. Her admin skills aren’t up to much but her underemployed boss develops an interest in training her to win typing contests, casting himself in the role of mentor and coach. Though Rose is unenthused, she obliges him when he wields the threat of unemployment. Under these inauspicious conditions, the twin possibilities of love and fulfillment soon hove into view.

Populaire is beautiful to look at. Each frame is a pastel confection, the outdoor scenes are full of verdure and crisp spring showers, and the clothes are New Look Dior-to-die-for. The camerawork is expertly controlled, lingering over Rose’s special typist’s manicure and her rain-drenched white blouse, or cutting speedily through the frenetic typing contest scenes.

The sugared visuals go some way in masking the uneven power dynamics that form the story’s central drama, but watching the characters journey from Point A to Point B is not as fun as it should be, even as the scenes zip by at a smart pace. There’s a creepiness in Duris’s performance that makes the rom-com trappings ring a little hollow, and his backstory with The Artist’s Bérénice Bejo doesn’t do much to explain his monomaniacal focus on competitive typing. Populaire is a memorable calling card for first-time director and co-writer Régis Roinsard, yet tastes a little sourer than a light yet nutritionally vacant piece of candyfloss cinema really should.