9
When Tim Burton is prominent in the billing, it's safe to expect an atmospheric world peopled by shadowy yet relatable characters; it isn't, however, a guarantee that the plot or dialogue will be much cop.

A rag doll that awakens in a post-apocalyptic future holds the key to humanity's salvation. 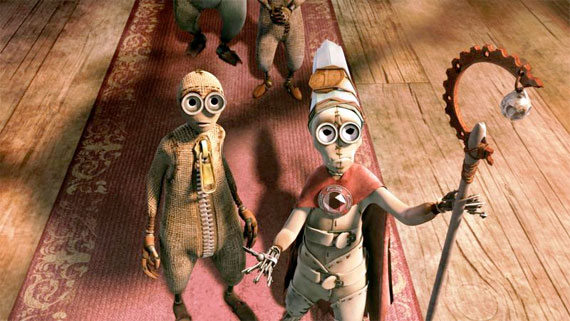 A new animated film produced by Tim Burton can be a slightly uncertain prospect. When Burton appears prominently in the billing, it’s safe to expect an atmospheric nightmare world peopled by an array of shadowy yet relatable characters; it isn’t, however, a guarantee that the plot or dialogue will be much cop. The slightly underwhelming Corpse Bride is a good example of this recent falling flat in the quality of his child-friendly animation. Unfortunately, 9 isn’t a return to form for Burton in this field. And, whilst 9 is the brainchild of Shane Acker, a first time animation director, the film’s failures are similar to the failures of other lacklustre Burton offerings.

These failures are easily explained, but difficult to excuse. 9 began as an 11-minute short, showing a ravaged landscape populated by silent “stitchpunk” dolls who are hunted by a mechanical beast. Acker used this short as a showcase of his technical skill as an animator, and of his imagination. Both of these attributes are in evidence during the full length version of 9 on release now, but unfortunately they have been diluted within an additional 70 minutes of less-than-enthralling filler. The stitchpunk dolls can now talk to each other, which made less sense than their previous silence. The primary drawback to their new-founded power of speech is that they do nothing but run around talking politics in an embarrassingly unsubtle manner.

Our hero, #9 (Elijah Wood) immediately pitches himself headlong into battle with both the creepy skeleton-machine that hunts his kind and #1, his dogmatic leader. Why the ire between #9 and #1? Because, as #1 states, “one sacrificed is for the good of many.” Such vaguely communist rhetoric doesn’t fly with #9, who firmly believes in the power of the individual – i.e., himself. His rebellious attitude leads the plot into all sorts of tedious cul de sacs of logic, wherein he leads those around him into mortal danger and fails to get them out of  it, all in the name of individualism. 9 features a strong cast of actors in supporting roles, but they are sorely underused. Jennifer Connelly has a few lines as warrior #7; Crispin Glover is wasted as a plot-point character, #6, who serves to witter “artistically” about “the source!” and thereby help #9 in solving the narrative’s mysteries. It all boils down to a deeply uninteresting take on the classic themes of man-versus-machine, individual-versus-group.

That said, this film wasn’t made to showcase a great plot and incredible characters. It was made because Acker’s almost post-apolcalyptic world is visually entertaining. It’s kind of like a mechanized version of the elephant’s graveyard in The Lion King; all rusted hulks, dusty horizons and bombed-out buildings. It’s very 1945 Dresden, complete with Nazi-influenced red and black flags lying in tatters. The stitchpunk dolls are beautifully animated, even if you couldn’t care less what they’re saying. And the monstrous machines fashioned from bits of bone and metal that stalk the destroyed city are wonderfully creepy beings. The action-filled parts of the film are so filled with horrors and explosions that I’d be surprised if they actually work in the film’s favour. The trouble is that this is a 12A feature with such low-quality writing that it can only be popular amongst a fairly young crowd – but then, the action is perhaps a bit strong for the average 10 year old. Maybe I’m underestimating the demand for a film like 9, however – Burton’s reputation precedes him enough to lure in a broader age group than it deserves, and it will please some. It doesn’t really feel like a cinematic treasure though, whichever age group it is intended for. It’s a film about the cold, inhumane quality of machines made without soul, and how soul can lend life to man-made creations, but ironically the film’s own creators seem to have spent more time using technology to make the fight scenes look cool than they did developing sympathetic characters. Shrill soullessness is the result.