Law Abiding Citizen
The best thing that can be said about Butler’s performance is that he is as painfully bad as he has always been, so top marks for consistency.

A frustrated man decides to take justice into his own hands after a plea bargain sets one of his family's killers free. 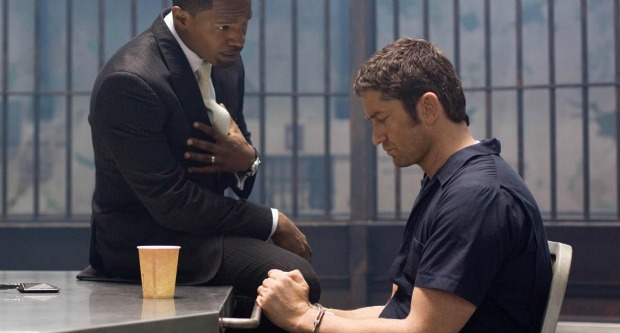 Law Abiding Citizen is a mind-numbingly stupid film centred around Clyde Shelton’s (Gerard Butler) quest for ‘justice’ after the man who broke into his home and raped and killed his wife is let out of jail after making a deal with the District Attorney. Years later he sets about killing everyone he holds responsible for this implausible miscarriage of justice – and succeeds. We have to watch as he finds increasingly violent and convoluted ways to kill people one by one and it’s even more boring than you might imagine.

Jamie Foxx takes the other leading role and plays an off-the-peg Hollywood District Attorney – running around with guns and flashlights as all senior lawyers clearly do in the race to tick every cinematic cliché imaginable. The best thing that can be said about Butler’s performance is that he is as painfully bad as he has always been, so top marks for consistency.

The fact that the plot is ludicrous in the extreme, and also extremely dull actually hides some of the more sinister political messages in the film. We are meant to sympathise with Butler’s character, despite the fact that he is a mass-murderer; ultimately it is the State and the apparently broken justice system that is to blame. This is nothing new; there is a long conservative tradition in Hollywood that has tapped into the deeply felt and very American suspicion of central government authority and its bureaucracies. Law Abiding Citizen shows agents of the ‘system’ acting recklessly and unjustly – one scene actually shows a judge (incidentally one of the very few women characters in this big man-fest) take improbable delight at illegally signing away someone’s civil rights.

So the message is that the system is so broken that it’s only reasonable to take the law into your own hands. The BBFC consumer guidance for Law Abiding Citizen is eloquent as always. They have classified the film as ‘18’ for the strong violence but interestingly also because of the very hazy moral ambiguity that the filmmakers have created by portraying Butler’s character in a sympathetic way. They have written that:

“The film contains a vigilante theme, with a man taking the concept of ‘justice’ into his own hands, using violence against those who he judges to have failed him. This theme was also considered suitable only at ’18’. The BBFC Guidelines require caution with themes that appear to endorse illegal behavior, such as violent revenge. In this instance there is some ambiguity as to how the vigilante is presented, with some dialogue references to the lack of wisdom of his choices, but this is counterbalanced with him being presented as a sympathetic character.”

Spot on as always. And watching Law Abiding Citizen you may well question the wisdom of your entertainment choices, especially in a month with such outstanding work on general release. Save your money, and your mind; this is a nasty, blood-soaked work of misogyny that doesn’t deserve your time.