Hop
A sweet cinematic deposit for Easter, full of beans like its rockin' bunny that all generations can enjoy together.

Fred, an out-of-work slacker who accidentally injures the Easter Bunny and must take him in as he recovers. As Fred struggles with the world’s worst houseguest, both will learn what it takes to finally grow up. 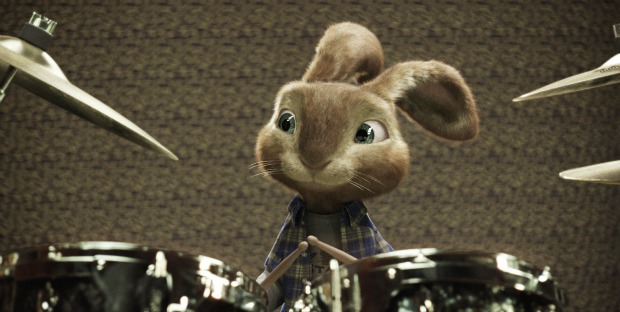 Admittedly, Russell Brand is an acquired taste, and if that taste is slowly turning sour in the mouth after endless media reports about the Brand marriage and rising Brand transatlantic stardom, you would be forgiven for releasing a disparaging groan at the mere mention of Hop – a film voiced by Brand. Much as this thought first curled the toes, the comedian actually tones down his (often) X-rated banter to bring as much heart, spirit and soul to little E.B., the Easter Bunny-in-waiting that it’s hard to wipe the silly smile off your face and grumble. And parents can breathe a sigh of relief, too – their little darlings will not be afflicted by Brandism just yet at such a tender age.

Just like its sugary setting, Hop is designed to sugar coat everything, and cynically give Easter that commercial feel normally reserved for Christmas. Basically, the Easter Bunny – E.B.’s dad (voiced by another ex-pat-come-good, Hugh Laurie) – wants E.B. to take over the family business, a Willy Wonka-styled factory on Easter Island that makes all the World’s Easter tooth rot in one place. But E.B., who is a dab hand at drumming, has grander ideas of making it as a rock drummer, and in typical hormonal teen fashion, goes against what Pop’s wants and runs away to Hollywood – where dreams come true, naturally.

Unfortunately, the streets are not paved with gold or drumming opportunities for talking bunnies. Then E.B. ‘bumps’ into another kindred spirit/slacker, Fred, played by James Marsden, who also has parental problems, and the pair of them, reluctantly, become best buddies while trashing a mansion and meeting the Hoff. After scheming lard-ass chick Carlos (voiced by the dynamically-vocal Hank Azaria) threatens bunny heaven and Easter deliveries, this results in the ultimate job for both rebellious sons, with new bonds and responsibilities forged.

As with every kid’s film, there are endless morals aplenty as lessons are learnt during the coming-of-age process. There’s absolutely nothing new here, except a CGI bunny is having a teenage crisis with a grown man-child. But both do it in an inoffensive and puerile fashion that it’s hard not to awake the big kid inside you, and get on board their voyage of self-discovery. Brand does have some free reign ad-libing in this, and it’s actually catching the throwaway comments that are the funniest, rather than the obvious, slapstick or borderline crass humour. The bunnies have a little annoying lip-synch trouble, too, in both worlds. Marsden goes into Enchanted panto mode, a combination of enthusiastic kid and self-depreciating adult that only makes you root for pathetic Fred all the more. Thankfully, there’s zero romance in this film – a girl-free zone, which would have killed the bromance it plays to. Hasselhoff’s camp cameo as himself on a TV talent show is a hoot, even if it adds very little to the storyline, but makes for a droll diversion. 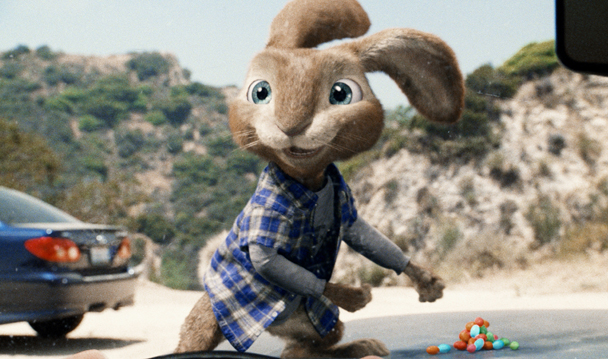 However, the film does feel a little disjointed, at times, ‘hopping’ from the real-world antics of growing up, to evil nemesis takeover mode like Despicable Me (another film made by the same studio), the latter of which has been done to death in recent years. Still, the characters need that crunch point that forces them to unite for the sake of the common good. Sadly, maniacal Carlos, who turns into a ‘bunny chick’, doesn’t appear to have long to hatch and execute his master plan, and the end result is a bit of a flat pancake, to be honest, which is a shame as it’s the trigger of the lads’ newfound maturity. The other issue you might have with Hop is the blatant Santa Claus movies rip-off, the idea that your Easter confectionary is delivered on a large egg-shaped sleigh pulled by hundreds of chicks, substituting Santa for a Leporidae. As previously said, the film-makers are hoping to tap into that holiday magic (and funds), but it’s certainly a case of déjà vu, and a chilling reminder that it’s less than nine months away until the silly season begins again.

Nevertheless, the added bonus is no sign of 3D effects anywhere – yes, a good, old-fashioned kids film of the Alvin and the Chipmunks variety that doesn’t rely on technical fluff to sell tickets, but cute fluffiness of a different kind. So, no need to fork out more for a family ticket, or help balance those overly-large specs on your poor little mite’s nose.

Hop is a sweet cinematic deposit for Easter, full of beans like its rockin’ bunny that all generations can enjoy together. So, hop over to a cinema to catch this carrot of a film.