Her
She's part entertainment centre and part comfort blanket, but her ability to shield him from the real world could never be anything more than temporary.

Heartbroken after the end of a long relationship, Theodore becomes intrigued with a new, advanced operating system, which promises to be an intuitive and unique entity in its own right. As her needs and desires grow, in tandem with his own, their friendship deepens into an eventual love for each other.

Writer and director Spike Jonze employs the complexities of a person-machine relationship as a reminder of the human cocktail of lightness, crippling pain and ubiquitous pleasures.

Her’s protagonist Theodore Twombly (Joaquin Phoenix), a successful writer in his late thirties, is enjoying the distracting qualities of holographic video games and bizarre phone sex. In between a career at beautifulhandwrittenletters.com, where he pens intimate letters for those too busy to write for themselves, and warm, catching memories of his talented almost-ex-wife Catherine (Rooney Mara), Theodore finds love with his sentient computer operating system, Samantha (Scarlett Johansson).

Jonze creates a world where guardian angels, usually mythical creatures found in the fantasy genre, become a technological reality. There are numerous examples in film and fiction of our longing for an unconditional supporter; with the His Dark Materials trilogy, author Philip Pullman proposes a realm where everyone has a dæmon (the soul, externalised and autonomous), and with Wings of Desire, Wim Wenders presents a Berlin laced with angels offering unseeable care. The guardian angels of Jonze’s imagination feel almost familiar: a newly emerged intelligent operating system called OS1, they inhabit Los Angeles in the slight future and are available to anyone with a smart phone. In a world where smart phones currently offer unprecedented sociability, connectivity and efficiency an all-in-one saviour feels imminent… we are ready for OS1! But as we learnt from Mary Shelley’s Frankenstein, the companion of our creation isn’t necessarily the best fit. The fragile and pure creation suffers from its inbred, sheltered qualities.

The optimistic and generous future which Jonze invents inflicts no judgement on Theodore’s attraction to his genius new gadget. When he explains his concern to close friend and neighbour Amy (Amy Adams) her response is, “falling in love is a crazy thing to do. It’s kind of like a form of socially acceptable insanity” – to her the type of love isn’t relevant, it’s love itself which is the sickness. This open-minded outlook is at the heart of Her, and originates in Jonze’s curiosity and fascination with other’s perceptions: “we don’t fully ever know how anyone exactly sees the world from their own subjective view, and the people we’re closest to have their own experience of the world that we’ll never truly know”.

In this progressive city we forget prejudices on non-standard unions and are kind to others’ frailties. Oscar-nominated production designer  K.K. Barrett forms a clean, bright and stylish metropolis, with fresh air and no cars. The subway takes you right onto the beach, or catch a bullet train to a snowy log cabin in the woods. Barrett’s future L.A, filled with “things that amuse us rather than things that felt brute,” was partly filmed in the Pudong Business District of Shanghai, with its curvaceous architecture and pedestrian friendly city planning.  Jonze was interested in depicting the way that style moves in circles, so alongside the forward thinking innovations and shots of the modern city are retro touches such as moustaches (modelled after Theodore Roosevelt’s), high-waisted trousers and an earth-toned colour palette.

This recognisable but utopian land is seen through the eyes of Samantha, ‘the first operating system with a conscience’. A highly sophisticated collage of the DNA of all the programmers who developed her, but also newly emerged like a baby, all experiences are her first. Her fresh take on the world is contagious, it infects the film, as does her hunger for practice and intelligence. This is in contrast to Theodore, who feels trapped in repetition, “sometimes I think I have felt everything I’m ever gonna feel. And from here on out, I’m not gonna feel anything new. Just lesser versions of what I’ve already felt.” 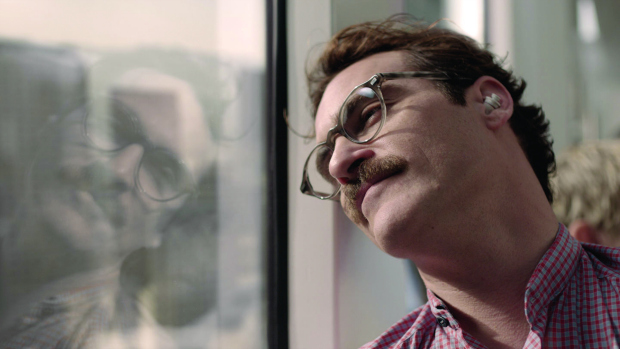 Initially Samantha’s relationship with Theodore is almost parasitic – he is her host body and she is dependent on him to fulfil her limitless ability to grow. But for whatever she takes from Theodore, she gives back more, in comfort and understanding. Samantha appears fully conscious (perhaps more so than our visible protagonist who spends his time in imagined landscapes of fake letters and immersive gaming) and artfully mimics human response, flaws and desires. Samantha and Theodore have conventional disputes, with jealousy and insecurities, the surreal difference being that her feelings of inadequacy comes from a lack of physical form (typical body insecurities pale into insignificance) and he isn’t jealous of other men, he’s feeling threatened by an OS reconstruction of dead British Philosopher Alan Watts (Brian Cox).

Theodore’s entire existence is shrouded in questionable authenticity, from his job, to his hobbies, to his sex life. The inauthentic life is not shocking, it’s familiar even, and his leap from anonymous phone sex to a disembodied sexual relationship with a computer programme is seamless and relatable. Samantha surprises and challenges Theodore, but not to the same levels that the real women in his life do, presented as having peculiar sexual preferences (“choke me with that dead cat!”) and predictable demands (“when will I see you again?”). Samantha’s opiate qualities help him through a hard period of separation, during which time Theo has “lost half himself”.

Theodore is having a relationship with himself, Samantha isn’t ‘real’, she is bespoke purchased labour, assigned to him as the outcome of a personality test. The ‘her’ in Her isn’t a real human (if she were it would be intolerable: watching the protagonist developing a sexual relationship with someone who is essentially his slave) and worryingly it’s within these conditions that he feels protected and secure. Samantha is an advanced painkiller – all the intelligence of the programmers aimed at making his life easier. And like the soma of Aldous Huxley’s futuristic novel Brave New World she offers perfect escapism pure love, a blissful oblivion of the mind with no side effects. This brings up interesting questions of truth, retreat, and self-indulgence. Amy points out, “we are only here briefly, and in this moment I want to allow myself joy” but the question is, at what cost? Theo’s highly evolved surroundings can’t protect him from regressing into isolation. The cruelty of the utopia is that its warm, comfortable, easy aesthetic makes the loneliness even more poignant. Jonze places the loneliness centre stage, with no distractions or other issues. The material world is readily accessible but basic human connections are still unavailable (in one of the first scenes we see Theo absolutely giving up on the reality of being able to sync an orgasm).

The fragility of the relationship is tested as we see Samantha growing exponentially while Theodore rides the rollercoaster of human experience, with all its scars and setbacks. Like a guardian angel she is not exclusive or tangible, she is the other, ethereal, and like the soma she can be used to suppress unwelcome feelings but not resolve them. Theodore’s guardian angel is part virtual personal assistant, part entertainment centre, part comfort blanket, but her ability to shield Theodore from the difficult real world could never be anything more than temporary.