Gravity
It is a film that does not make us care, it’s a film that expects us to care without having to work for it.

Dr. Ryan Stone is a brilliant medical engineer on her first shuttle mission, with veteran astronaut Matt Kowalsky in command of his last flight before retiring. But on a seemingly routine spacewalk, disaster strikes. The shuttle is destroyed, leaving Stone and Kowalsky completely alone—tethered to nothing but each other and spiralling out into the blackness. 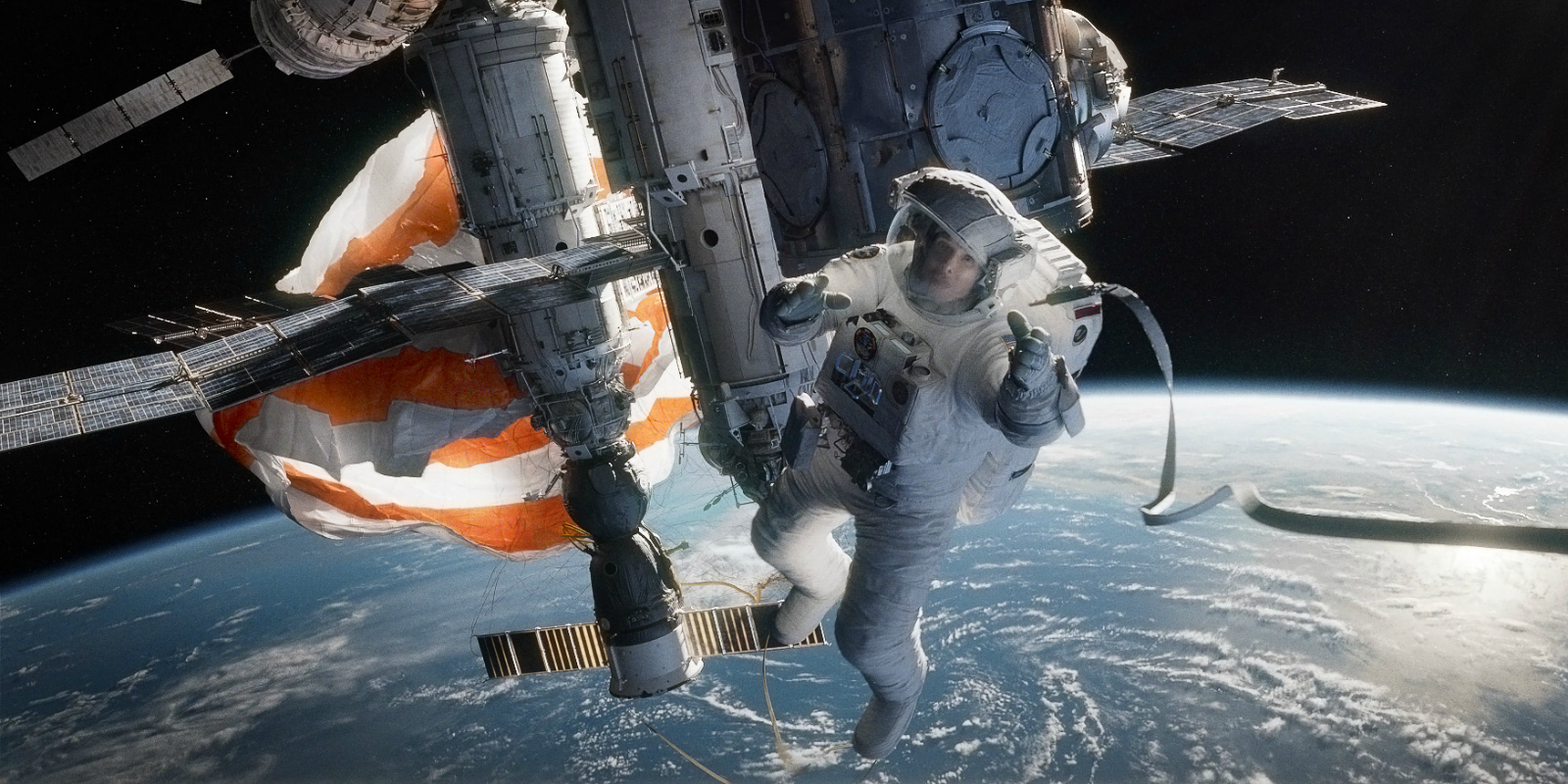 Gravity opens over black, just a title slowly coming in, a powerful building blare on the soundtrack, like the wonderful THX ident sound Deep Note, and then an abrupt cut-off that leaves us suspended, and a cut in picture to a shot of earth outside the atmosphere.  Cuarón has shown us, boom, like a punch in the lungs, the profound nature of the silence of space; he has, aurally, created a vacuum.  It’s masterful.

Then we settle in for a glorious Cuarón signature long-take, the camera floating and arcing, unchained, a ballet of three characters in spacesuits and machinery subjected to all of Newton’s laws of motion in their rawest form (inertia, for example, can be a pain in the ass) the assuring heft of Earth and its gravity to keep us, well, grounded.  The three characters are Dr. Ryan Stone (Sandra Bullock), Matt Kowalsky (George Clooney), and another guy named Shariff who remains faceless, in long shot, which doesn’t bode well for him.

And then more set pieces of unimaginable peril (in space, you don’t just suffocate, as you would drowning, or freeze to death, as you would in scaling Everest—you may also pop like a ripe tomato attached to an air compressor), all in spectacular single takes that attempt to out-awe even the spectacular set pieces in Children of Men, with it’s inside the car, outside the car, ping-pong ball juggling, pyrotechnics and stuntwork, SFX make-up squibs—all in one long take! Here we are spinning in space, Dr. Ryan Stone on the verge becoming a shooting star if she reenters the atmosphere, or, worse, just more dark matter floating out in space, dancing with and around her as the earth and the cosmos spin by, and we’re seamlessly taken from outside to inside her helmet.

“It is a film that does not make us care, it’s a film that expects us to care without having to work for it, utilising all the cinematic bromides without nuance or personalisation”

These breathless opening sequences end as Ryan enters a space station, an odd sequence that seems to act as Rolfing therapy for Bullock as she gasps and sheds her space suit and goes into a rebirthing session, assuming with an astonishing lack of subtlety a fetal pose suspended in zero gravity, complete with umbilical cord.  It seems an odd time for a nap, with that nice George Clooney floating away into the cold abyss of space.  Perhaps it’s a nod to Kubrick’s ‘star child’ from 2001, A Space Odyssey?  Unfortunately not—the film is, according to Cuarón, a ‘journey of rebirth.’  It is at that moment that all the breathless wonder at the stunning technical achievement of the film sours.   This is going to be a film of hackneyed aphorisms and trite homilies.

The trouble starts with the script, which has the banality of greeting cards or morning shows on network TV.  All the emotionalist cinematic shorthand and sentimentalist cliché are there, in the dialogue (‘No one taught me how to pray,’ ‘this is going to be a hell of a ride,’ Kowalsky’s man’s man railleries), in character development (this is Kowalsky’s last mission—we know where that’s going, which is where it always goes), and in the exposition (hagliogising of the family, with baby photos of characters we never got to meet, or baby babbling on the space pod radio—it is a film that does not make us care, it’s a film that expects us to care without having to work for it, utilising all the cinematic bromides without nuance or personalisation.

The script is by Cuarón’s son, Jonas.  While nepotism is part of life in Hollywood and not necessarily a bad thing—look at James Brolin’s scion, or David Bowie’s, or any of John Huston’s brood—that’s not the case here.  Would it have been a better movie if Dr. Ryan Stone didn’t talk, if she wasn’t given the opportunity—considering she was alone, in space, with possibly minutes to live—to verbalism her hackneyed backstory?  It’s character psychology of the worst kind, not taken from observation of real people, but of close parsing, it seems, of past blockbuster scripts.  With all that Hollywood money, was he trying too hard to toady to Hollywood expectations?

But you don’t get to make an existential art with a hundred million dollar budget.  And you certainly won’t earn $300 million in it’s first three weeks.  Y Tu Mama Tambien had a budget of $2 million.

The other problem is the character of Ryan Scott.  Ah, a Sandra Bullock role if ever there was one, at least in a two-line character synopsis. Woman, alone in space, must be spunky and resilient and cute.  But unlike in Speed, or Miss Congeniality, or The Heat, this is an enormously atavistic female role.  Ryan is weak and delicate, always about to barf in her flattering spacesuit, depressed and self-destructive, stubborn to the point of jeopardy.  It seems unlikely NASA would send her, in her present condition, on a space mission.  They don’t just send scientists and astrophysicist nerds into space; astronauts are science soldiers.  Surely there are rigourous screening, not to mention training, procedures?  Physically and emotionally she’s not ready.  She also doesn’t seem to be able to make a decision—or a good one, anyway—without a man to guide her or contradict her.  She can’t even drive (we’re told repeatedly she always crashed the simulated flights)!  Talk about regressive gender stereotyping; that hasn’t been used since the 1950s.

She needs a man, or at least the spirit of man, because without a man she is a foundering, unmoored wreck.  Without a man we would never get to a low angle of Sandra Bullock in wet T-shirt, ecce femina, emerging from primordial slime.  Rebirth.