Good Vibrations
Hooley constantly believed that there were others like him who - despite the troubles surrounding them - loved Belfast and loved music.

Belfast music legend Terri Hooley - the man responsible for discovering The Undertones and recording Teenage Kicks - gives alternative music a chance to flourish in Belfast during the darkest days of Northern Ireland’s Troubles. 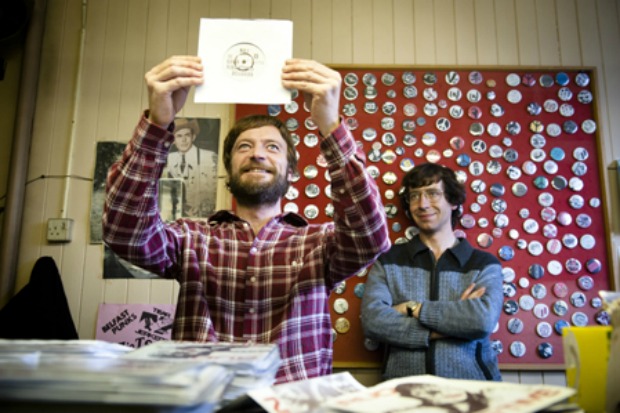 “New York have the haircuts, London have the trousers, Belfast has the reason” shouts Terri Hooley across a crowded Ulster Hall. The fact that his guest list for the fundraising concert is so big that he’s making a loss on the door doesn’t bother him. This was the Woodstock of Belfast Punk. When Hooley opened Good Vibrations records on Great Victoria Street a year or so into the troubles in Belfast, he was going against the norm. Everyone was leaving Belfast, nobody was starting up businesses. But Hooley would never have predicted what came next.

Hooley – played by Richard Dormer – discovers a group of youngsters who don’t distinguish themselves as Protestants or Catholics – at least not in a picking sides sense – he finds young people who want to fight against what their society has become and have a soundtrack for it. This was the birth of Belfast punk and Terri became “the Godfather”.

In times of struggle, music often prevails as a transcendent, unifying force and soon Good Vibrations became more than just an out-of-the-ordinary record store, it became a label, a studio, a vinyl-printing factory. It discovered the Outcasts, Rudi and, most famously, the Undertones with a record that Hooley travelled to London, traipsing from major label to major label – convinced in was the best song he had ever recorded – but nobody agreed. That was until John Peel liked it so much that he famously played it twice in a row.

And so started the legend of Hooley, a warm-hearted maverick who – rightly or wrongly – lived on impulse and instinct. The upside of this trait led to his discovery of the Punk scene, the downside led him to making bad business decisions. Selling the Undertones for £500 and a signed Shangri-las album (which he never actually received), or staking his house as collateral for a less than secure record shop being two examples.

The film jumps along as recklessly as the accompanying soundtrack with archive footage and photos cleverly intercut throughout. Dormer is excellent as Hooley – committed to changing people’s lives to music, constantly believing that there were others like him who – despite the troubles surrounding them – loved Belfast, loved Northern Ireland and loved music. He had the reason.