The story of an unlikely friendship between a bear, Ernest, and a young mouse named Celestine. 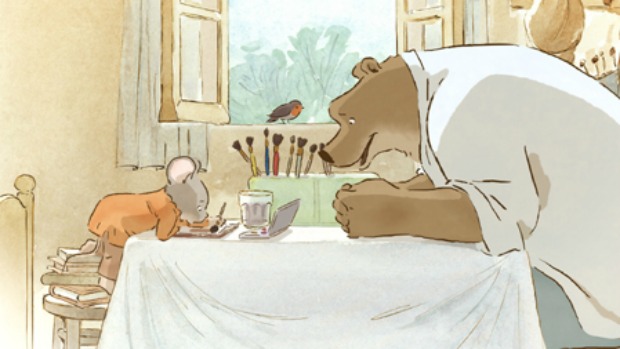 A number of films have followed a couple of fugitives on the run, the route their lives take as a result and the choices they make to survive. Think Bonnie and Clyde, You Only Live Once, Young and Innocent, Natural Born Killers, Badlands. Actually these are terrible comparisons. Don’t think about those at all. This is much nicer than that. There are no brutal murders, killing sprees, they’re not even a couple. This is a film about Ernest and Celestine – a hungry bear and an artistic mouse – and their crimes are not really serious. It’s a family film. I’m sorry I ever brought those other ones up.

Celestine is a mouse who is expected to grow up to be a dentist and is told stories about big bad bears to supposedly protect her against the grizzly inhabitants that live above them. As a dentistry intern, Celestine travels up through the sewer to the town above, creeping into houses and stealing teeth from under the pillows of young bears. The mouse world collects and stockpiles the teeth of young bears because they are the closest tooth-type to their own and act as decent replacement teeth. I have no idea of the factual accuracy of this but let’s go with it.

From the beginning, it is clear that Celestine doesn’t want to be a dentist. She wants to draw fine art and refuses to believe that all bears are big and bad. After an awkward initial encounter with a hungry Ernest they hatch a plan to collect both teeth AND food but it backfires and they become fugitives on the run, hiding from both the mice police and the bear police. Again, it’s not as serious as your general fugitive couple movie; this is just a mouse and bear who want things to be a little easier.

It is the simplicity of the film that makes it so enjoyable. Gabrielle Vincent’s children’s books have been brought alive with the same painted tones and styles that first accompanied the series. It is a sweet, quaint and charmingly unusual animation.

If you look deep enough beyond the watercolour, you can make links to the need for a more accepting society – where bears and mice can co-exist despite their cultural differences. Okay, some bears *might* eat mice, but there are also some bears that are scared of mice and surely somewhere in between there can be a happy balance? Surely.

You could perhaps go further and look at Ernest’s constant hunger as a systematic problem with unemployment and poverty in France – which has reached three million for the first time since 1999, bringing the rate up to 10 per cent. How’s a bear supposed to get work in a climate like that?

It is likely though that this film is not campaigning for a fairer future against austerity but is simply a nicely drawn, heartwarming tale about a mouse and bear. And sometimes that’s enough.