Easy A
Easy A is most notable for the funny, charismatic performance of Emma Stone – one that suggests the makings of a star.

After a little white lie about losing her virginity gets out, a clean cut high school girl sees her life paralleling Hester Prynne's in "The Scarlet Letter," which she is currently studying in school - until she decides to use the rumour mill to advance her social and financial standing. 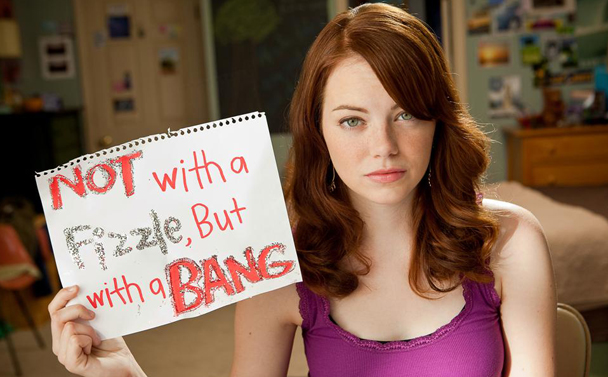 Surprisingly perhaps, the modern American teen movie has become rather well-acquainted with classic literature. Cruel Intentions spent some quality time with ‘Les Liaisons Dangereuses’ in New York; 10 Things I hate About You and Shakespeare’s ‘The Taming of the Shrew’ were hardly complete strangers; and now Nathaniel Hawthorne’s 19th century novel ‘The Scarlet Letter’ finds its plot being (loosely) played out at a modern high school in Ojai, California.

Maybe it’s all the studying kids have to do in their English classes – so much in fact, that the play or book being studied actually permeates their reality and teen-film makers have been recalling false memories of school for inspiration. Or more likely it’s simply because, as Shakespeare himself knew only too well, all the best ideas have been nicked off someone else.

The difference with Easy A, though, is that it is joyfully open about its inspiration. The characters are all acutely aware of the original novel and its storyline – they’re studying ‘The Scarlet Letter’ in class and some of their actions and choices come about through a desire to directly copy characters from the novel. In some ways the novel really has permeated their reality, and it is this canny self-awareness that helps Easy A steer clear of some of the more obvious clichés often present in many other teen-movies.

That’s not to say the film is entirely bereft of clichés – it is, at heart, a romantic comedy after all – but there are no jocks, no cheerleaders, no gross-out jokes, and no obvious underdogs. What we do have is Olive (played excellently by Emma Stone) – a normal high school student who pretends to her best friend that she has had sex with a nonexistent college guy one Saturday night. In reality, however, Olive has spent the weekend in question singing and dancing in her bedroom (cue a running gag at the expense of pop star Natasha Bedingfield). Unfortunately for Olive, a group of abstinence-obsessed fanatical Christians at school overhear this story, and vicious rumours surrounding Olive’s sex life begin to spread like wildfire. Olive initially decides to embrace the rumours and fan the flames in order to help bullied classmates, but as the rumour-mill turns ever quicker her fabled antics threaten to cost her her dignity.

The inevitable cheesy ending feels rushed and doesn’t quite convince, but over the course of these 92 minutes it’s refreshing to see a mainstream teen-comedy that doesn’t glorify teenage sexuality or talk down to its audience. It’s also strangely thrilling in this context to witness jokes at the expense of homophobia and religious fanaticism for a change.

The funniest and warmest moments, though, surround Olive’s relaxed family life, and there are good, comic performances by Patricia Clarke and Stanley Tucci as the white, liberal parents who treat their children more like younger siblings. Rather than portray Olive’s parents as soon-to-be-ordained saints for having adopted a black, younger son (see: The Blind Side – or rather, don’t see), the film simply embraces and makes light of perceptions of this ‘unusual’ family. This is more than just a statement too, as director Will Gluck successfully creates a natural family atmosphere onscreen.

The performances on the whole are very good  – the main exception to this being Lisa Kudrow as the kooky, deadpan school counsellor Mrs. Griffith, which is basically a slightly angrier take on the ‘Phoebe from Friends’ act she’s been doing her whole career. This is, however, a relatively minor gripe with a relatively minor character.

As with any teen film, there’s unlikely to be a huge amount on offer here for anyone in their twenties or beyond, but it does offer up a refreshing take on high school teen-life that elevates it above most traditional rom-com clichés. There are also some good laughs of course, but Easy A is most notable for the funny, charismatic performance of Emma Stone – one that suggests the makings of a star.