Tim has never left his small hometown. He’s never stayed at a hotel. And he’s never experienced anything like Cedar Rapids, Iowa. Sent to represent his company at the annual insurance convention, Tim is soon distracted by three convention veterans who will show him the ropes and push his boundaries. 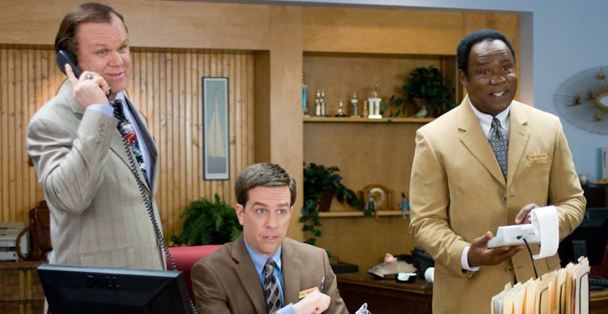 Tim Lippe (appositely pronounced ‘Lippy’) is a small-town American with a trusting nature and a steady insurance sales job. His hair is always parted tidily, his shirt is always tucked in, and his smile is always ready. To his mind, his sleepy life in Brown Valley is “awesome!” He’s an unworldy guy, even by in his parochial Wisconsin community, but those that know him – his boss at Brown Star Insurance, his faithful customers, and his non-committal lover (Sigourney Weaver) are fond of his sincerity and eagerness to please, in much the same way that one might be fond of a cuddly mascot.Cuddly mascots have their place, but they tend not to be entrusted with big responsibilities. But when misfortune besets Brown Star Insurance, Tim – played by Steve-Carrell-in-waiting, Ed Helms (The Hangover) is the only employee available to represent the business at the annual Cedar Rapids insurance conference and win the coveted Two Diamonds award. It’s the first time he’s ever travelled by plane, stayed in a hotel, or had to socialize with strangers. He prepares diligently (laminating his Local Interest lists) but fails to anticipate every possibility (encountering his first ever real-life black man). His learning curve is a ludicrously steep one, and the fish-out-of-water scenario is always amusing.Tim’s fellow convention attendees in Cedar Rapids prove to be a likable bunch: there’s self-confessed blowhard Dean Zeigler (John C Reilly), attractive kook Joan (Anne Heche), Ronald, a soft-spoken fan of The Wire (Isiah Whitlock Jr. – Clay Davis in The Wire), and down-to-earth prostitute Bree (Ali Shawkat). Tim’s endearing habit of ordering cream sherry on nights out and his customary earnestness win him friends, but he struggles to preserve and justify his personal moral codes when his new milieu challenges them.

This comedy is designed to be as comforting as a warm blanket – the laughs come reliably and often, and there is an amiable tone to the proceedings that encourages you to like Tim and his optimistic take on the world. The conservative (with a small ‘c’) outlook of a provincial person is poked fun at in a gentle, liberal-Hollywood manner – though Tim is conventional in a slightly small-minded way, his prejudices melt away once he accepts the open-mindedness of his new friends. I daresay Americans who favour a Tea-Party approach to life will dislike the unflattering portrayal of Tim’s fallen idols and our hero’s change of perspective, whilst social liberals will find it cheering to see such an easy conversion to their team. I was left pondering who the film is really for – the modest-living people it ostensibly celebrates, or savvier metropolites who laugh at their tameness?

Cedar Rapids is, incidentally, a real city in Iowa. Funny as the film is to me – a young city-dwelling Brit – I’m sure it’s even funnier to more local filmgoers. Or at the very least, more pertinent. But though the joke of the location (the jokecation? No, maybe not…) necessarily depreciates over distance, Cedar Rapids is a good comedy. It may not receive much hard-hitting critical kudos – it lacks the dark pessimism that critics relish in their funnies, c.f. Sideways – but it’s a cheering piece of cinema about the innate goodness in ordinary people. Dorks, straying wives, drunks and hookers all get treated with the same essential empathy, and it’s a pleasure to watch them all muddle along together.