Brave
The fact that a young audience will look at this film away from the often prevailing heteronormative, princess-finds-her-prince angle is the thing that makes Brave radical, refreshing and so very important.

Determined to carve her own path in life, Merida defies an age-old custom sacred to the uproarious lords of the land. Her actions inadvertently unleash chaos and fury in the kingdom, and he ensuing peril forces Merida to discover the meaning of true bravery in order to undo a beastly curse before it’s too late. 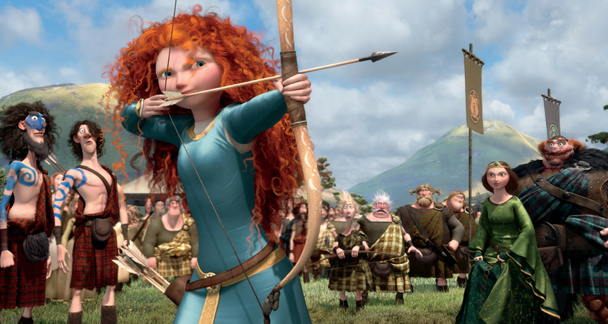 When the announcement was made that Brave would be Pixar’s next release, it coincided with a less than favourable critical reception for Cars 2 – the first time that this had happened to Pixar – and perhaps something looking like a cross between Shrek and an overtly stereotypical Mel Gibson production of a similar name wasn’t quite the right film to pull the studio back on track. However, what’s followed is the single most radical Pixar film to date.

Brave is the story of Merida – which, in a Scottish accent, sounds like “Murder” and brings back memories of Taggart at every mention of her name. Merida is a younger, less offensive, gaelic version of Rebekah Brooks with big ginger locks and a horse (presumably not one borrowed from the police or ridden by the Prime Minister).

Merida has no interest in being a princess and all the manners, rigidity, conformity and courting ceremonies that the role entails.  She wants to be herself; do, wear and eat what she wants and shoot arrows as she rides on her (non-Government sponsored) horse – a feat in which she outperforms all the men entirely. When she is forced to conform, she runs away, encounters a witch and puts a spell on her mother in order to change her traditional views. However, the spell goes wrong with disastrous consequences.

As with many recent animated offerings, it’s hard to look at Brave and not notice recycled characters and plot devices. The Scottish highlands are intricately designed but there’s still  probably a bit too much a reminder of Braveheart in the portrayal of the Scots. It’s a good, funny Disney film but ultimately it’s not really about that. It’s the message that Brave sends that sets it apart from the others.

That’s because Brave doesn’t conform to the generic Disney princess story. Yes, there’s a princess – but this isn’t a version we have seen before. She’s not like the repeat-offending traditional Disney princess young children have been left to look up to and has no desire to be married, make pretty things or even try to be pretty. She’s adventurous, smart, witty, determined, independent and willing to fight for what she believes in, the true foundations of a feminist hero. This is a Disney princess we should be excited about, a refreshing alternative from the out-dated norm.

Merida literally tears her restrictive clothing at the seams to make it more comfortable on the way to defeating all her incompetent, disgusting and unworthy male suitors at archery. She simply decides that marriage is not a path she is going down and that’s that. It’s not a trick; there’s no narrative arc that leads her to falling in love or being rescued by a handsome prince. It’s her life and she is in charge of what she wants to do.

Surprisingly, this is the first Pixar film in which a woman takes the lead. Wall:E, Up, Finding Nemo, A Bug’s Life, Cars, Ratatouille and The Incredibles are all dominated by male leads. We’ve even had male buddy movies (Toy Story and Monsters Inc.) before a female protagonist. The fact that a young audience will look at this film away from the often prevailing heteronormative, princess-finds-her-prince angle is the thing that sets Brave apart. Although overdue, it marks a clear step-change. Radical, refreshing and so very important.