Jamie Bell and Channing Tatum
The stars of The Eagle sit down to talk about physicality, stunts and eating rats.

Channing Tatum and Jamie Bell sit down to talk about physicality, stunts, eating rats and, their latest film, The Eagle.

Channing, you said jokily that you wouldn’t have done it had you known about the physicality of the role. Were there some surprises there?

Channing Tatum: Yeah. Even if they told me that it was going to be the coldest thing that you’ll ever go through in your life, I still don’t think I’d have really understood it until the second day and I’m soaked all the way through, and it’s almost freezing. If it hadn’t been so wet it would’ve been freezing!

Just to be outside for 13 hours…we couldn’t get trailers sometimes, because we’d hike for 30 minutes [to the location]. Our director [MacDonald] was even carrying cameras and reels out to the set. It was just a really small-knit family and you kind of go through hell together. That’s really what Jamie and I’s characters did, and Tahar [Rahim, the Seal Prince] was our enemy, but we all got closer than before.”

Jamie, as an actor I know you’ll say “we’ll do whatever we’re asked to do”, but this seemed to be above and beyond at some stages…

Jamie Bell: These guys got very lucky, having me and Channing, because we’re very good physically. We both have physical backgrounds, predominantly in dance of course. When you apply that to things like swordfighting or horseriding – I’d never ridden a horse before, which was a big gamble for [the makers]. I was very honest about that, a lot of actors lie and say in the meeting that they can ride a horse totally fine. I had to learn that from scratch.

I really feel like the arduous nature of getting it done was part of the struggle for the characters. It’s their endurance and stamina that gets them through it. I don’t think we had the same endurance and stamina, really – but there were moments where we had to keep each other going.

This is a film that prides itself on its authenticity – so the rats, Jamie, the ones you chewed towards the end of the film, were they real?

JB: I don’t know what it was that they gave us to eat. Still don’t really know. They said it was the gelatine that holds together Haribo treats…bullshit!

CT: It tasted like parma violets! We had to do a few extra takes, I think everyone was enjoying watching us literally retching.

Did you lose weight to play a slave character?

JB: No. I’m just a small guy, in all…if I’d dropped any more weight it would’ve been a bit ridiculous. I tried to bulk up a little bit – we wanted these guys [Marcus and Esca] to look like they could definitely take care of themselves. Channing’s character is a very trained, formal fighter, part of the military, so we wanted to differentiate Esca as a very feral, wiry, instinctual fighter. 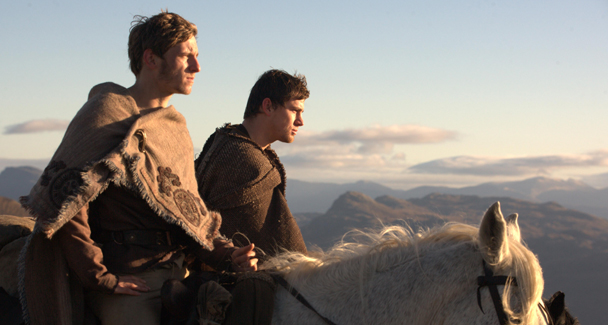 Did you do all your own stunts?

CT: Almost all of the stunts really, except I think the river scene of going down the rapids they wouldn’t let us do because it had been raining for a month straight, and one horseback riding scene where we just didn’t have time to do it.

JB: Yeah, well, you’ve got all these actors who’re incredibly game at doing this stuff, and obviously very competent at doing it and have done it many times before. So it requires you to really step up [said as he glances mischievously at Step Up star Channing Tatum]. Sorry. That was really not intentional at all, I swear.

Anyway – we were really competitive with each other in the duels and we pushed each other hard – whose got the fastest horse; whose got the best fight scene; who can stay in the river for longer. It’s childhood stuff, going round throwing swords and spears on horseback and chasing boars. The stunts were really good fun.

Were there any injuries sustained during the battle scenes?

CT: I definitely got hurt –  I got scalded pretty bad during one of the scenes – but in the fight scenes? Not really, just bangs and bruises, but that’s about it.

There was a moment [ in the scene Marcus holds Tahar’s character down in the river] where I basically have to put Tahar under and it’s so cold underwater that all thought, all air goes out of you, and you’re just in shock. I’ve got to hold him underwater and he’s supposed to tap me when he’s ready for me to pull him up. And he didn’t tap me. I was like ‘Did I kill him?!’

You’ve got a very convincing – and towards the end of the movie, quite moving – rapport. Did it come quite naturally?

CT: We’d kind of talked about it a little bit; there was an unforeseen complication because Jamie and I did get along so well right off the bat that keeping the tension of the story of [master and slave]…it was…we had to make sure we reminded each other of it from time to time. It has to stay pretty taught, until the last scene of the movie. But we were laughing as soon as they yelled ‘Cut!’, so it was a crack-up the whole time.”

Through this film your characters evolve without any female characters, any love stories. Did you notice a difference?

CT: You’re really letting us fall into something here!

Doing anything different is always refreshing but I don’t think it’s ever refreshing not having women around…I don’t know, I think it was accurate of Kevin and Jeremy [Brock, the screenwriter] to make the decision to really stay with Marcus and Esca and not feel the need to fall into a cinematical stereotype of always needing to have a love story in there, and instead just focus on the friendship.