Why Jayne?
The directors of Mansfield 66/67 write about what attracted them to 50s Hollywood movie goddess Jayne Mansfield.

P. David Ebersole and Todd Hughes are the directors of Mansfield 66/67, a documentary about Jayne Mansfield's life, and the rumours swirling around her untimely death.

As children growing up in America in the 1960s, we both had heard the story of Jayne Mansfield, the beautiful blonde movie star who was decapitated in a horrific car accident while her children slept in the back seat. Todd remembers his mother telling him that the actress was dabbling in black magic, and that she had been a nude altar at Anton LaVey’s Church of Satan in San Francisco. True or not, these stories conjured up forbidden images of the naughty adult world of swingers. David’s mother was deeply involved in sixties feminism and the end of the era of the blonde bombshells carried a whole different connotation. So, with or without the added layer of LaVey’s roguish brand of Satanism – a playful Hefner-esque Playboy After Dark dabbling in the dark side – Jayne’s life and death proved to be a mutual obsession for us…offering insight into the changing world we lived through as young men. 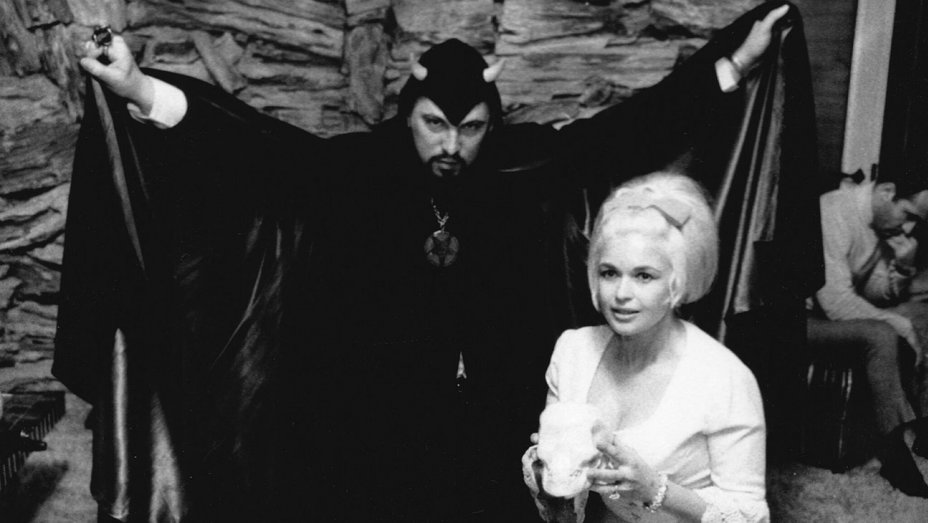 The idea is to “explode” what might be called the usual documentary approach, all in an effort to explore the psychology of the changing times and the mythology of the larger culture

If our parents were formed by their rejection of the picket fence lives of the 1950s, ours were shaped by the way in which that generation insisted on breaking down societal norms and constrictions. Jayne’s uneasy intersection with that moment of American history meshed perfectly with our common interests in people who live as outsiders, especially those who experience a questioning of faith and how that expands an acceptance of mans’ multiplicitous nature, be it expressed in sexually adventurous behaviour or non-traditional paths in life. All very heady thoughts when you are talking about an alleged affair between a woman known best for having the body measurements of 40-21-35 and a man who liked to wear plastic devil horns and a red cape to impress girls! But such is the wild world of Jayne Mansfield because everything Jayne naturally feels larger than normal life.

But we found ourselves not very interested in the “simple” idea of making an exposé where we were might try to dig past the rumours and legends to expose the absolute truth, but rather found ourselves fascinated by creating a celebration of the storytellings and spectacles which have ingrained themselves into the lore and accepted truths of Hollywood Babylon. For instance, although it has been disproved many times, many people today still insist that Jayne Mansfield was decapitated, preferring to hold on to the gory hearsay in lieu of accepting the reported facts. Why? What is more interesting about that which may not be true but lives on in the collective unconscious?

Further, in lieu of recreations, we attempted to blur the lines of realness by having over fifty actors and dancers portray Jayne in various fantasised interpretations of her life. This approach gave us the freedom to create imagined nights on the Sunset Strip, secret meetings between Jayne and Anton, conflicts between her lovers, and even whimsical period animation to illustrate two key moments that otherwise only live on in memory and retellings of events in her life circa 1966/67. The idea is to “explode” what might be called the usual documentary approach, all in an effort to explore the psychology of the changing times and the mythology of the larger culture through the story of Jayne and Anton, to envision ourselves into the head space of these, in our opinion, early pioneers of enlightened thought and revolutionary behaviour.

The directors of Mansfield 66/67 write about what attracted them to 50s Hollywood movie goddess Jayne Mansfield.