Dylan Edwards is an actor who stars in Pramface, High-Rise, The Job Lot and forthcoming comedy Wasted. Along with his partner Natasha O' Keeffe, he writes, directs and stars in new web series Difficult Second Coming.

Five years back I cracked my knuckles and clacked out my first ever script. I had no clue what I was doing, but I wrote it because I was fed up auditioning for comedy shows I felt were shitty and cliched. So, rather than be a moany actor, passively shuffling in and out of castings, slowly losing the will to live, I decided I would put my money where my mouth was and write my own. Having failed every written exam I had ever taken, my expectations were low. Once I felt the script was in okay shape (never one for being too precious with my work) I sent it out to a handful of production companies and was shocked and excited when my script was picked up by one of them. I even secured a brilliant literary agent.

Two or three frustrating years of notes and meetings later, I had a new found respect for those shitty comedies I so hated. Getting anything made for TV is hard.

That’s some abridged back story for context (there’s more twists and turns and moments of genuine heroism in the long version). 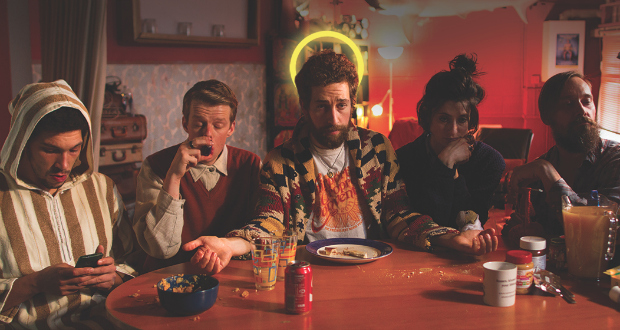 From the outset, Difficult Second Coming was different. Firstly, because it was a collaboration piece; I wrote and directed the series with my wife, Natasha O’Keeffe. Secondly, we decided from the get-go that this was not a script to be sold to a production company or made in to a TV series. Our intention was to make it ourselves as a mini-web series – stripping away all the pressures of writing a show that was “TV friendly” or sellable to a production company. We were going to make something we wanted to make, how we wanted to make it.

Like an episode of Coronation Street, the stakes were low.

We found a couple of small time independent producers who dug the project and were able to secure us a very modest budget. And that really was that.

We wrote nearly all the characters with specific actors we knew in mind. We kept the locations to a minimum and we didn’t write anything too ambitious – i.e. scenes in space or CGI monsters. If we had to shoot the show in our own flat on a camera phone, we would have. It’s just about working to your means and being creative within them.

I still hold onto the hope of my own TV series being made and continue to have various scripts in development with production companies, praying for Judd Apatow to come and sweep me off my feet and whisk me off to the enchanted castle of great Tellydom.

If you look at the TV landscape in this country, you will see a mountain of fantastic drama next to a brown puddle of comedy. People screaming “OH MY GOD, did you see Happy Valley/The Night Manager/Line of Duty”… etc etc. When was the last time anyone screamed like that about a comedy in the UK*? Why is the standard so unbelievably middling-to-low? Comedy is a high art form and we used to be good at it. I hope it changes. I hope some young thing comes along from nowhere and blows peoples minds. I hope that someone is me. But if it isn’t, that’s okay. I just hope it happens soon.

Difficult Second Coming is available to watch now at difficultsecondcoming.com

A new landscape for comedy