Mark Cousins is a filmmaker, critic and programmer. He programmed the Edinburgh Film Festival (1996-97), hosted BBC2’s Moviedrome and Scene by Scene (1999-2000). His movies include The First Movie, The Story of Film: An Odyssey and A Story of Children and Film. He is the co-founder (with Tilda Swinton) of the 8½ Foundation.

I go to Bologna and Milan tomorrow, to talk about children and film.  My movie A Story of Children and Film is being released there, and I am to speak at two gatherings of film educators.  I am in the middle of a twenty-five city publicity tour, but have today off.  No flights, no trains, no hotels.  To feel the benefit of the day, I decide to walk across the city where I live – Edinburgh, Scotland – and back.  The sun is shining, the equinox has just passed.  We are entering the kingdom of the sun.

The last thing that I want to do on my walk is think about children and film.  That’s not how things work, of course.  Try to switch off, and you turn on.  I start to consider why kids should be shown movies.  I come up with seven reasons: joy, solace, art, visual learning, empathy, mindfulness and inspiration.  They come into my head in short sentences, like a manifesto:

Joy is perhaps the most obvious.  A film is a magic carpet ride.  When a child watches one, she feels the rapture of self loss. To escape is to escape your worries.  Movies bring happiness.  To watch films in a cinema is to sit in winter and look at summer.

Solace is the flip side of this.  Lots of children feel lonely.  Their social class, or race, or taste in music or clothes, or burgeoning desires make them feel different from other kids they know.  Cinema makes them feel less alone.  Onscreen, they see other kids like themselves.  From this comes confidence.  Of course a child can affiliate through social media too, but it answers back, and can bite back.  Cinema doesn’t.

When a child watches a movie, he or she encounters art, a brilliant art of space and time.  Art is transformative.  Encountering form makes us different to how we were.

Many children learn through words, but an estimated 10% – 4 million children in Europe alone – are better at learning visually.  Our art schools are full of such kids.  To force them to try to learn verbally, is to damage their self-worth, and squander their talents.

More than novels, music or painting, movies are the art of the moment.  They are brilliant at capturing spontaneity and seeing the detail, the energy, in the present tense. Childhood is the most spontaneous time in our lives.  As we grow up, we often lose that spontaneity.  Psychologists and philosophers now understand that appreciating the here-and-now is beneficial to mental health.  Cinema helps with that.  When children watch films they see a mindful world which echoes their own.  In this way, kids and movies were made for each other.

7 If a child watches films, he or she will be more inspired to make them. 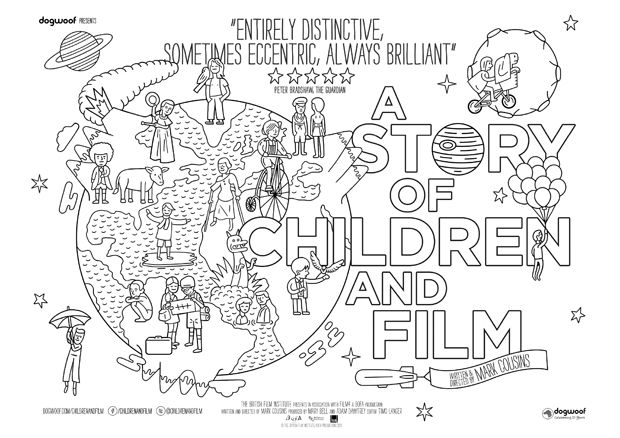 Mark Cousins’ A Story of Children and Film is released in the UK and other countries.  www.astoryfofchildrenandfilm.com

He has curated a season of great films about childhood: www.cinemaofchildhood.com