The Blind Side
I was in awe of this movie; stunned. Stunned that it had made it to the big screen, let alone the Oscars. The Blind Side is just not good filmmaking.

The story of Michael Oher, a homeless and traumatized boy who became an All American football player and first round NFL draft pick with the help of a caring woman and her family. 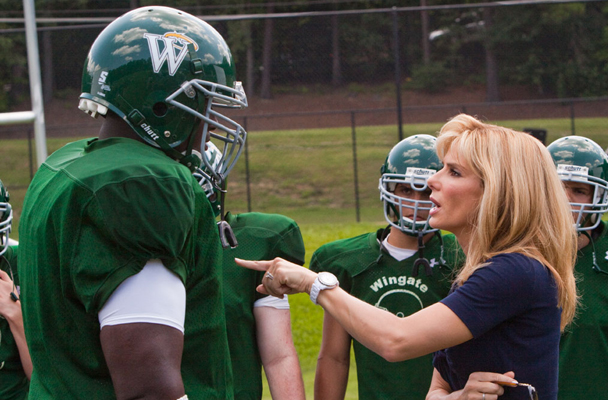 I was in awe of this movie; stunned. Stunned that it had made it to the big screen, let alone the Oscars. It’s glossy fodder for the Trinity Broadcasting Channel, a right-wing Christian wet dream:  neo-colonial buildings, no litter, no negroes, no gays, a big house, squeaky pink children with no trace of libidos, a fortune gained without guilt by blighting the minority masses with growth hormone-laced fast food, self-righteous Bush-era arrogance, and card-carrying NRA motherhood (guns don’t kill people, Avon Lady Christian moms just clean up ghettos – or, as Dirty Harry, said, ‘Nothing wrong with shooting as long as the right people get shot’).

It’s apparently the true story of Leigh Anne Tuohy (played by Sandra Bullock), one of those Amazon-stewardess types the Bible Belt is bloated with, frosted, tinted, sculpted, who takes in a homeless black student, Michael Oher (played by Quinton Aaron), and with her Family Values like a Kevlar bulldozer, sees him succeed and become a professional football player.

Yes, Sandra Bullock is perky, plucky, and charismatic.  She always is.  She’s an absolutely winning screen presence. But no more here than in The Proposal, or Speed, or Miss Congeniality II: Armed and Fabulous.  An Oscar performance this is not.  Not like Gabourey Sidibe in Precious, a performance devastating in its interiority, so authentic I thought the filmmakers were actually exploiting a damaged woman who didn’t even know cameras were pointed at her.  No, Bullock’s win was a case of quantity over quality, down solely to the fact that she makes a lot of money for Hollywood and sometimes that is awarded.  Like with Titanic. Or Julia Roberts.  But that’s what the People’s Choice Awards are for.

True southern racism isn’t a hatred of black people.  The old southern plantation owners most definitely did not hate the blacks.  They liked them very much. Just not when they become uppity. Like Barack Obama, with his terrorist socialist plans to shit all over our freedom and give healthcare to the poor.  The fact that Bullock’s character takes in a homeless black man doesn’t make her not a racist. It means she’s got herself a house negro. The Blind Side gives us the most egregious representation of a black man since Stepin Fetchit, totally emasculated, simple, and pliable. Leigh Anne rescues Michael like—and treats him like—a big neutered Saint Bernard puppy.  He’s more of a pet, or a pet project, than a self-determined human being. She even helps him by correcting his black vernacular, teaching him to speak White: speaking like a black man is wrong, except of course when her son, S.J. (Sean Junior, played by Jae Head) does it, then it just makes him cool. And to make sure things stay safe and clean, we are told that when Michael is taken, by college recruiters, to titty bars, the experience gives him nightmares—surely, developmentally, that’s alarming.  There are, of course, the bad blacks, the ones who have sex and drink and aren’t submissive, but instead of treating them with concern, with understanding that they, too, need better opportunities, they are threatened with Christian guns—the good guns, the righteous kind protected by the second amendment.

Even despite its comfort with its reprehensible assumption of a God-endorsed status quo, its self-satisfaction, and its paternalistic racism, the most hateful aspect of the film is still the young Tuohy son, S.J.  Yet another Disney Channel assembly line brat written by adults who mistake cliché for wit, S.J. was of course smarter than the adults and wise-cracking, churning out hackneyed lines like the opening act at the Osmond Family Theatre.  Precocious to the point of inducing infanticide, S.J. (like the deluge of other current child characters) was world-weary, rolling his eyes at the naivete of his parents. I hate these precocious monsters, like an army of demon dwarves.  SJ even knuckle-bumps with Michael, getting all ghetto (it’s okay when republicans do it; when Michelle Obama does it it’s a Taliban knuckle bump)  It is ludicrous to think S.J. wouldn’t have just been swatted away like a gnat. I mean, what self-respecting African American would be joyed at having his culture co-oped by a spoiled white brat?

The Blind Side is just not good filmmaking.  Credibility is sacrificed for sentimentality: there is no complexity or depth, instead response triggers are telescoped with repetitive reaction shots of, say, downcast eyes to show the guilt of small-minded folk (which is basically anyone who doesn’t agree with Bullock’s character), or smug grins to show how righteous these people or are, or machinistic polarization of all-good or all-bad, which leads to lazy narrative coincidence. This felt like faith-based movie-making: just throw in scenes and relationships and don’t bother crafting them into a logical whole, just hope for the best.  Why was there a drawn-out scene, given ponderous weight from an orchestral score, where Michael encounters his brother working in a restaurant and embraces him? It was never addressed or referred to again. And near the end there’s a flashback sequence, a reprise of the entire movie, a glimpse of each scene we’ve just sat through. Because, I guess, we’re stupid and lazy.  At one point Sean Tuohy (Tim McGraw) derisively jokes about laying ‘on the couch like Woody Allen or something,’ a good old boy snort at the east-coast intellectual, effeminate, elitist—and, let’s be honest, Jewish—liberal contamination of God’s true America. Dicey ground to tread, even if it is just liberal badgering, evoking the name of a great filmmaker in a movie so poorly made.

I know this was based on a true story, but it’s hard to believe.  It must be a true story jammed into a candy floss machine. The American school system is enormously concerned about litigation, and particularly a good, private, Christian school would be.  It would also be concerned about remaining a good, private Christian school.  Would they admit a large, homeless man of any color, with an IQ of 80, with no I.D., and no known address?  They’re not even sure of his age.  It seems doubtful.

In one shot Sandra Bullock, nominally as Leigh Anne Tuohy, says, ‘Don’t get your panties in a wad,’ out of the window of her parked car to an impatient driver behind her. There was a cameraman there, sitting dutifully on, no doubt, the crab dolly.  He’s paid approximately $414.22 per day.  The dolly costs around $125.00 a day; the dolly grip costs around $269.04 a day, and the Panavision camera considerably more.  Standing just off frame would have been the boom operator ($311.97 per day), exchanging knowing glances with the on-set sound mixer ($462.26 per day). Next to him would have been the first assistant camera, the focus puller ($299.69 per day).  There was a second assistant cameraman, perhaps the clapper-loader slating the scene, at $275.30 per day.  The director, John Lee Hancock (God knows what he was making) would have been sitting in his director’s chair, wearing—probably—a baseball cap. The director of photography, Alar Kivilo, was there ($676.75 per day), as was the key grip ($290.05 per day), the best boy grip ($225 per day), the gaffer ($290.05 per day), the best boy electric (also $225 per day), lighting grips (at least two, I would imagine, at $247.94 per day), and electric grips (a relative bargain, at $175 per day).  Pacing behind the camera was the first assistant director ($400 per day), looking nervous, because that’s what first A.D.s do, and a second A.D. ($300 per day), trying to avoid the gaze of the line producer ($400 per day), because that’s what everyone does.  Just under the camera would have been the script supervisor, squatting, diligent, alert, silent ($242.26 per day). Bumping into each other would have been the personal assistants to Miss Bullock and Mr. Hancock (salaries highly varied and negotiable).  Over to the side, where someone was manning the crafts services table ($210.20 per day; the cost of actual M & Ms and muffins and bottled water and other sundry treats is anyone’s guess), would be an off-duty policeman (at least one, at at least $200 a day) and an off-duty fireman (needed every time there are lights being used, which is all the time, at least $200 a day).

These are just rough estimates—low-ball, really—reflecting the minimum union wages of the various IATSE locals.  There would also have been a technician for VTR playback at $311.97 per day, a set decorator at $521.92, a set dresser $253.71 not to mention props people, and the cost of show vehicle.  Flitting just beyond the frame would have been the make-up artist ($330.18 per day), bounding in to add touches between takes, and the hair people ensuring each frond to it’s place ($327.54 per day), and the on-set costumer ($270.27 per day) scrutinizing the cuffs and collar to make sure continuity.  All to capture Sandra Bullock saying ‘Don’t get your panties in wad,’ a phrase first crystallized into cliché-hood in a low-rated sitcom around 1978. To capture 2.8 seconds of film, 67 frames of Kodak 35 mm celluloid (approximately $590 for a 1000 foot reel; approximately $1500 for developing and prints).  It’s the waste that angers me.

‘Who’d have guessed we’d have a black son before a democrat friend?’ Sean Tuohy asks.  No one, is the answer. And that’s the problem. ‘God Bless me,’ he says elsewhere.  Also telling, in its use of the personal pronoun.