Kick-Ass
Realism is turned way down, the violence dial is stuck on 11, and all is adorned with a vibrant technicolour.

Dave Lizewski is an unnoticed high school student and comic book fan who one day decides to become a super-hero, even though he has no powers, training or meaningful reason to do so. 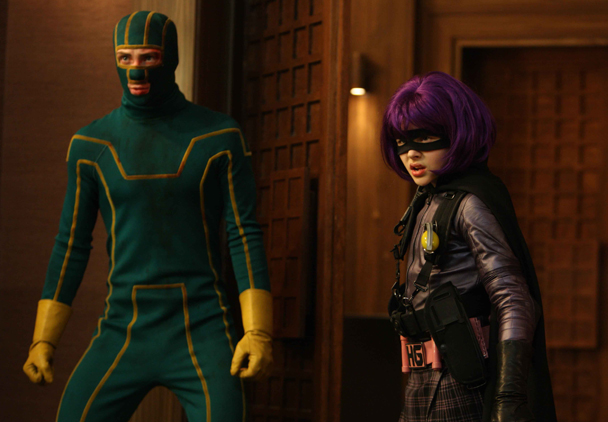 Kick-Ass has a scale and a justified arrogance that smells like hot dogs, sounds like the star-spangled banner and feels like warm apple pie. If they stuck a label on the thing it would have Uncle Sam over the legend: Made in the USA. Except it’s not. Check out the credits: directed by Matthew Vaughan (English), written by Jane Goldman (English), starring Aaron Johnson (English) and based on the comic book by Mark Millar (Scottish). It’s a bonkers bit of cultural ventriloquism.

Johnson’s Dave Lizewski is an average high-school student and comic-book fan, living in a comic-book version of New York where he and his friends are mired in unchallenging, underwhelming lives. Sitting in their local comic book store, he wonders aloud why no one has ever tried to be a superhero. One like Batman. No special powers, just a vigilante spirit and a job lot of chutzpah. Dave casually and secretly decides to do it. Before long, his bold but pathetic crime-fighting efforts are noticed, filmed, uploaded onto YouTube and he becomes, as ‘Kick-Ass’, an internet star. Some contrast to his struggles at school where rumours that he is a gay prostitute can only further his romantic malaise.

All bets are off on Johnson now going stratospheric but he’s not the only one who shines. The other major members of an arresting cast appear when Dave’s bold japes earn him unwanted attention. He manages to step on the toes of Big Daddy and Hit Girl a father/daughter team of trained and tooled superhero assassins played by Nicolas Cage and Chloe Moretz. Cage’s character occupies a typical tale of vengeance but he’s unexpectedly funny and looks totally at home as a homicidal oddball. Moretz, who is just 12, is an innocently deranged revelation. The bloody trail they leave and Kick-Ass’s indiscretion leads to a dangerous case of mistaken identity. Frank D’Amico, Mark Strong’s cartoonish Mafia boss, wants him and them off the scene. Meanwhile, onto the scene emerges a copycat as Chris Mintz-Plasse playing Red Mist completes a straightforward but smartly connected web of personalities.

The characters stay the right side of caricature in a universe whose gods have fiddled with the controls. Realism is turned way down, the violence dial is stuck on 11, and all is adorned with a vibrant technicolour. This stylized milieu is such a coherent rendering of a comic-book aesthetic, it’s easy to imagine entire sequences being lifted from the comic frame by frame. As an imitation of the 21st century it’s emptied of personal, social or political complexity and polished to an enticing lustre. As worlds go it is puddle deep. But I’d like to visit.

The script is achingly knowing and it feels like every single genre convention has been pored over: that one twisted; that one parodied; that one left in because it’s just works. When a cliché is flouted it can’t do it without pointing, doing a dance and singing a little ditty. It has its cake, eats it, sicks it up, shovels it down again and you just don’t mind. Its easy, generous and fresh wit is unfailingly charming.

Tonally, the film is a work of real alchemy. The discord between plot, dialogue and visual style is superbly balanced. Fittingly for a film about hidden identities, this balance means that Kick-Ass is cunningly disguised as pure Hollywood. In actual fact it’s an ogre of an indie. This pretence is utterly convincing, so when it does or says something that Hollywood just wouldn’t dare, it’s a real jolt. This juvenile dissonance is the secret to its joys. It’s your Gran saying “cock” or a bear riding a bike, wearing a cape. Somehow the trick endures for the whole film.

Reference spotters will not be stretched by blatant allusions to Taxi Driver, Scarface, Kill Bill and countless others. The latter when it comes is more surprising than it should be. A film so clearly in love with the history of the medium can’t help but acknowledge Tarantino when aiming for comic-book gore. The oddest thing is that in one respect, Tarantino comes off badly in the comparison. This particular brand of stylish dismemberment owes him a huge debt, but seen through this lens the original looks humourless. Kick Ass on the other hand is lots and lots of fun.

If you look hard enough in the dusty corners of a multiplex, you’ll find the bruised hopes of eternal teenagers. Some have given in to growing up and now spell cinema, art-house, but even they know that it is in the midst of popcorn, sticky floors and cardboard cut-outs that myths are told and legends are made.

The innocent faith that big movies, comic-book movies just might be good movies lies interred. Batman visits the grave and asks, “Was I not enough?” but if he casts his eyes around he will see why the answer is no. In a neighbouring lot rests the cobwebbed cadaver of Spiderman. Nearby a modest headstone reads ‘Clark Kent,’ and another, ‘Watchmen‘ above the grim warning, “fatally burdened by expectation.”

Still we go, in hope, to the multiplex. Go, and occupy screens haunted by popcorned vomit, indiscreet groping and the chilling echoes of rom-com laughter. And we are disappointed again.

Into that void steps Kick-Ass.

A technicolour pastiche of a genre movie, a kaleidoscope of gratuitous violence, an adult’s adolescent fantasy – and a new template. One set with such swagger that one line of dialogue, spoken by a diminutive 12 year old, will be recycled as a challenge to Hollywood: