In The Loop
Politicians lie, cheat, ass-kiss and then lie some more, just to get ahead. And there you have the basic premise to Armando Iannucci’s In The Loop.

The US President and UK Prime Minister fancy a war. But not everyone agrees that war is a good thing. The US General Miller doesn't think so and neither does the British Secretary of State for International Development, Simon Foster. But, after Simon accidentally backs military action on TV, he suddenly has a lot of friends in Washington. 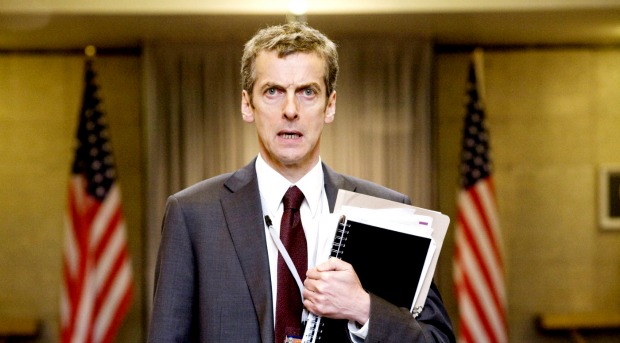 Politicians lie, cheat, ass-kiss and then lie some more, just to get ahead. And there you have the basic premise to Armando Iannucci’s In The Loop, the cinematic incarnation of his television programme The Thick Of It.

It’s not a new concept. The media already thrives on this cynical, weary attitude to politics; comedians queue up round the block to take their swipe at the latest ministerial mishaps on Have I Got News For You. But we like to have our views reinforced and just because we “know” what politicians are like doesn’t mean that we don’t want to see and hear about them in all their ugly, grabbing glory.

If nothing else, In The Loop is rich in its profanity. It positively revels in its “fucks” and “cunts”. Each delicious swear word is there to be gobbled up by the audience like a tasty morsel and no one serves them quite as well as Malcolm Tucker. Peter Capaldi is magnificent in the role. “Fuckity-bye-bye” he sneers at one point; when a character can’t even offer a polite farewell you know you’re on to a good thing.

Tucker, as the Prime Minister’s Director of Communications, is there to clean up the messes other politicians leave behind. And when dim-witted MP Simon Foster, played to perfection by Tom Hollander, manages to accidentally announce that war (presumably with Iraq although this is never actually mentioned) is unforeseeable, it is the scathing Tucker who must “manage” the situation.

Bungling his way to Washington, with his naïve assistant Oliver (Chris Addison) in tow, Foster soon becomes a pawn that all the American politicians want to exploit. His confusion over where he stands on the potential invasion means that both the anti- and pro-war camps want a piece of him. And it is perhaps here where the film finds its heart. For although you don’t really like Foster, Tom Hollander’s portrayal of conscience versus career at least arouses your sympathies and gets you thinking a bit too.

The second half of In The Loop doesn’t quite have as many of the pithy one-liners that crowd the portion set in Britain. Tucker is brutal to his compatriots, but in America even he struggles at points, becoming a much smaller fish in a rather larger pond. It does however feature a cracking performance from James Gandolfini, who plays upon his usual tough-guy image to create a nuanced and surprising character. He is General Miller, a key player in the anti-war movement and while he is just as abusive as every other person with power there is also a more thoughtful side, which Gandolfini executes to perfection.

In The Loop probably won’t tell you anything you don’t already know about politics but, nevertheless, it does reiterate an important message. It’s worth watching solely for the outstanding dialogue, brilliant performances and diverting plot, but don’t be fooled. You may be laughing the whole way through, but as soon as the credits roll, you’ll stop giggling and start questioning your conscience instead.