Perseus, mortal son of Zeus, battles the minions of the underworld to stop them from conquering the Earth and the heavens. 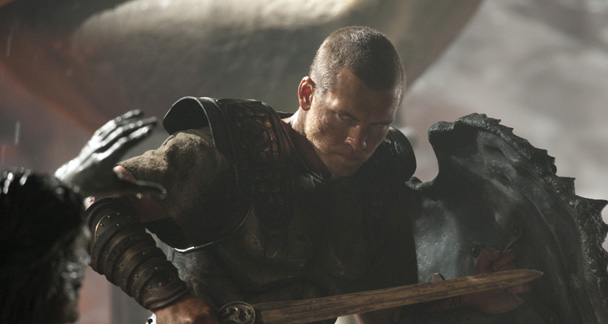 Is it wrong to fault a movie like Clash of the Titans for not making sense?  It feels wrong. I mean, I loved Jason and the Argonauts and all those Sinbad movies so I feel the nag of genre loyalty. But those movies—even for a 12-year-old only there for the Cyclops and the army of skeletons—felt more narratively nourishing. The cardinal law, the primal imperative, of all fictive works is that you can create a universe with whatever rules you want —one that can include Death Stars, cowardly lions, scorpions the size of P & O Ferries—but you have to stick to those rules.  In other words, you can have a spaceship come down in Independence Day, but not in Dynasty; you’re able to cry at a death in Terms of Endearment, but not in Saw VI.  And the film’s problems aren’t even down to the lack of fidelity to classical mythology (Zeus didn’t create man, Prometheus did, much to Zeus’s annoyance; and Io wasn’t made ageless by a spiteful goddess but was instead turned into a cow; and a Kraken created by Hades didn’t kill the Titans, Zeus did after his father, Kronos, ate him and his siblings and, having been eaten, Zeus made Kronos throw them all up again). No, mythical accuracy is not the point. This is an action movie, not an Open University lecture. But it doesn’t follow it’s own rules.

Why, for instance, were the aforementioned giganotosaurus scorpions tameable?  They were, effectively, the spiteful demon blood of Hades spilled after Acrisius got his hand cut off. I mean, this was potently evil stuff, this blood. It makes Acrisius tear soldiers apart with his bare hands like a sous chef de-boning chicken. But soon the humans have them harnessed and are riding them like drugged circus elephants. And why are ‘even the gods afraid of the Kraken?’ Couldn’t they just create another Medusa to zap it with her ugliness?  It’s a lack of narrative short-term memory.

One can even look past the details, but the very crux is unconvincing. Why were the humans rising up against the gods?  They decry the tyranny of the Gods, claim they are being treated unfairly: ‘They need us,’ the humans say, ‘they need our worship.’ It sounds like some kind of labour dispute against exploitative corporate fat-cat bosses. But seriously: they’re gods.  Gods of lighting, Krakens, Medusa’s, the sun.  Do the humans really think they stand a chance?  Then they seem to mobilize against the hubristic ruling elite of Argos, who are as unconcerned about the masses as Marie Antoinette, ‘Hundreds of men are dead,’ Andromeda chastises her pampered parents, ‘yet you celebrate.’  Masses against the ruling elite again. Who’s the enemy?  Luckily it’s clear who the hero is.  Perseus (Sam Worthingon) is that rugged individualistic staple of film—more Robert McKee than Homer—going it alone to avenge his family and be a paragon of anti-elitist robust manhood (‘I want to do it as a man, not a god!’).  This Perseus is more of a marine than a classical hero, heavy metal arena rock with bongos scoring his fight scenes, and the modern macho arrogance to utter lines like—as they’re headed into Medusa’s lair—‘Don’t look the bitch in the eye.’ Yeee-haa! Let’s kick some Gorgon ass!

But, then, even with Perseus there is inconsistency.  The warrior men of Argos hate him because of his Olympian roots (Zeus raped his mother), yet they all want him to actualize his god-self so he can use magic swords. ‘If there’s a god in you be sure to bring it,’ says Draco (Mads Mikkelsen), the Argos warrior travelling with Perseus, who, in the next breath, says, ‘When I spit in the eye of the gods, then I will smile.’

They are against the gods in concept, it seems, but don’t shy from enlisting them when it gives them advantage. Indeed, they can only kill the Kraken—a nuisance created by a god—by using god-crafted weaponry—the head of Medusa.

It is wrong, however, to make a movie like Clash of the Titans uninvolving. Which it is.  There is no sense of journey, of odyssey; no sense of bond among the community of warriors set off to—what?—kill Hades, or the Kraken, or defeat the gods, or defeat the corrupt rulers of Argos, or save Andromeda, or whatever it was they were trying to do.  There are no stakes, let alone high stakes. The posse goes into Medusa’s temple and half the cast is dispatched in matter of minutes and there’s no sense of loss. The characters weren’t individuated or sympathetic. And even when people do die, even in the final showdown, they can just be brought back to life again by Zeus. It’s like cheating: we suspend our disbelief, but are rewarded with rule changes. It’s rude.

There are some good monster moments—and some moments of delightfully creaky animation that seemed to be mimicking Harryhausen’s stop-frame work—but mostly it felt derivative (the sand nomads with the LCD eyes the warriors meet in the desert are like the Jawa from Tatooine, only taller, cross-bred with the talking tree from The Wizard of Oz).  Sadly, it is a good cast who should have been in a better movie.  Liam Neeson in a shiny disco armour is Zeus, Pete Postlethwaite, looking like Aesop, is Spyros, and Ralph Fiennes as Hades is half the man that Voldemort is, even with his penchant for Dementor-like face-sucking.  Fiennes speaks in husky whisper, as though he was ashamed to deliver lines like ‘what is more beautiful than death?’ I don’t know. Flowers? Less lucky is Gemma Arterton as Io, who, after kicking the shit out of Perseus to train him how to fight, lies on top of him and had to use a regular, audible voice to coo, ‘ease your storm.’

It’s becoming as pointless to write about using 3-D in films as it is to write about using colour film.  But, be that as it may, the 3-D in Clash of the Titans was nowhere near as immersive as Alice in Wonderland or Avatar (and I still maintain that neither of those films were as immersive as Magnolia or Fargo, and those were only in 2-D). With the sluice of 3-D films, aesthetes of the technology are burgeoning along with the artistry and are distancing themselves from the carnival hucksters who brought us popping eyeballs and things poking at us from the screen for no reason other than to just poke at us, the likes of those who brought us Bwana Devil, Jaws 3-D, and Freddy’s Dead, the Final Nightmare. They frown on blatant trickery and as with any snowballing technology there is new terminology. An ‘outie’ is the term for any gratuitous, z-axis sideshow thrill used to make the audience recoil, like spears being aimed at your head or sharks getting all up in your face.  Clash of the Titans, sadly, had many outies, from scorpions to flames to swords to coins. Like the cast—and the affection for the Harryhausen progenitors—it felt like another opportunity squandered.