Bad Lieutenant
Cage pulls off one of the greatest performances of his career; his painfully hunched-over appearance is as uncomfortable to watch, as it is utterly compelling.

Terence McDonagh is a drug and gambling-addled detective in post-Katrina New Orleans investigating the killing of five Senegalese immigrants. 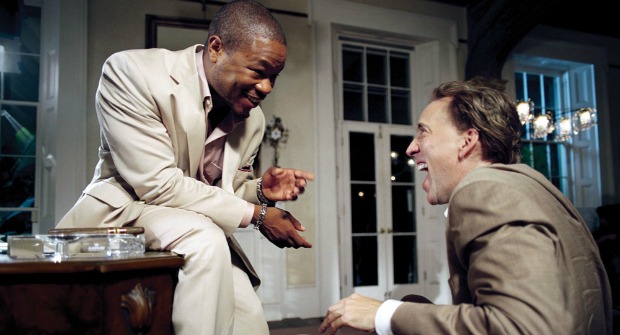 Bad Lieutenant Port of Call: New Orleans follows Terrence McDonagh (Nicholas Cage), a New Orleans Police sergeant who, in the post-Hurricane Katrina devastation, receives a promotion to lieutenant for heroism for saving a trapped survivor. During his heroic act, McDonagh injures his back and becomes addicted to prescription pain medication. McDonagh struggles with addictions and finds himself involved with drug dealer Big Fate, who is suspected of murdering a family of African immigrants.

The first thing to say is that it’s unclear to what extent this is a remake of the 1992 Bad Lieutenant with Harvey Kietel in the leading roll. Werner Herzog has claimed on record that he hasn’t seen the original and that this title was forced upon him by a studio unsure how best to market a very strange film and who was looking to capitalise on the 1992 classic’s name. It should be noted that no one involved in the original has been credited in the production of Herzog’s film. This debate will surely run and run, but it’s largely irrelevant as, although the two films bear some similarities, there are far more differences.

Herzog takes us through a surreal journey of a man’s pain, psychosis and addictions. Cage pulls off one of the greatest performances of his career; his painfully hunched-over appearance is as uncomfortable to watch, as it is utterly compelling.

His relentless quest for the next ‘hit’, takes us to dark places and leads him to commit such reprehensible actions that they are often darkly funny by virtue of their extremities. One such notable scene is when he tortures an old woman to find information, threatens her friend with a gun and uses language you wouldn’t normally expect to hear in a care home. He ends the encounter screaming “I hate you…I hate you…you’re what’s wrong with this country”. His ostensibly evil actions are also surprisingly funny thanks to Cage’s remarkable performance and a very sharp script.

McDonagh hates humanity, and as he destroys himself and everything around him it’s hard not to feel similarly about him. Herzog employs surrealistic flights of fancy to the film that only add to the sense of manic downfall. The dancing iguanas singing ‘Please release me’ shot on video has the audience rolling with laughter, but although colorful, this is the darkest form of comedy. Having been sucked into McDonagh’s deprivation; this is the last place we expect to find comedy. But Herzog does make us laugh, and as we do we share in the utter mania being depicted on screen. This is audience participation at its boldest.

Eva Mendes plays McDonagh’s prostitute girlfriend who elicits the only empathy for a fellow human being that we see from McDonagh. Despite the unbelievable circumstances, and their shared addictions, there are moments of genuine tenderness between the two and its hard not to wish the relationship well.

A puffy Val Kilmer plays McDonagh’s partner; himself a bad lieutenant. Between the two, they subvert the notion of ‘good cop/bad cop’ instead playing ‘bad cop/bad cop’ to great effect. Kilmer is under-utilised however, although this appears to be a conscious choice on the part of Herzog. Much of his dialogue is delivered off-screen, or at least without the front of his head visible to camera. Herzog does not want us to understand this man or his motivations, perhaps so as not to detract us from the Bad Lieutenant of the title.

Werner Herzog has proved that he is still on form after decades in the business. Bad Lieutenant Port of Call: New Orleans is a remarkable film. Its audacious comedy, dystopic vision and astonishing, exhausting performance from Nicolas Cage at his most sadistic and unbalanced, amount to an unexpected gem. Truly unmissable.