All Is Lost
Somewhere between the parables of Jesus and Noah, is one of Robert Redford.

A lone sailor awakens somewhere in the Indian Ocean and finds several inches of water in his yacht. During the night, he realises, there was a collision with a seemingly harmless metal container, but this does not concern the sailor, who fixes the damage and continues on his way – or so he thinks. 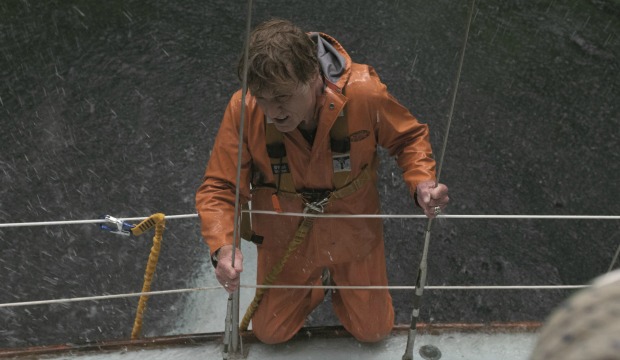 Finally, a film with very little dialogue and a lot of Robert Redford’s face. And what a face that man has. Aged by time. Softened by emotion. Weathered by the sea breeze. Hardened by life. And here he is, playing an unnamed character with no back-story. His character could be anyone: bad or good. You know nothing about him, which puts the judgment entirely on the viewer. I, for example, like to imagine this man (played by Hollywood superstar and ‘King of Sundance’ Robert Redford and his wonderful face) is actually Hollywood superstar and ‘King of Sundance’ Robert Redford. Other people might be more imaginative.

So here he is: Robert Redford, possibly playing himself. He’s on a boat and lost in the middle of the Indian Ocean. He’s been there for days. There’s not much left of him except for soul and body and half a day’s ration. You’re never told how he got to be living on a boat, only that he has awoken to a hole and increasing amounts of water flooding his small, homely downstairs cabin. He cleverly uses an anchor to strategically position his boat away from the hole-creating large metallic obstacle, sets about fixing the problem with limited tools and succeeds. This man is a resourceful sailor. He’s like Ben Ainslie but instead of an America’s Cup course, it’s a lorry full of children’s trainers.

His versatility at problem-solving doesn’t end there; he climbs and abseils to fix the mast, he pumps water out of his cabin using a piece of wood and manages to make a seemingly-dead radio somehow work again. He learns to work out his position using barely anything, navigates horrific storms and turns salt water into drinking water. Somewhere between the parables of Jesus and Noah, is one of Robert Redford. He doesn’t have the luxury of sending out birds looking for land; he has a couple of flares and the despairing reality that large freight ships would likely not notice him when travelling through their shipping lanes.

The excellent camera work really emphasises the vast, seemingly infinite, open expanse of the sea and underlines the hopelessness of Redford’s survival attempts. Aurally, the sound is diegetic; the wind, the waves, the incessant creak of the boat. You hear what’s there. There’s no emotionally stirring music, just natural sound sometimes interrupted by sparse one-word sentences or swear words.

There’s obviously a lot invested in Redford. He has to carry the film every bit of the way and it’s ultimate success is down to him. He has to convey his inner thoughts, his heart, his soul, his hope and his despair all through his facial expressions. But what a face to be doing it with.