Aliens in the Attic
A talented and mostly unknown young cast and equally talented, if somewhat underused, group of comedians elevate what could easily have been a generic children’s adventure.

A group of kids must protect their vacation home from invading aliens. 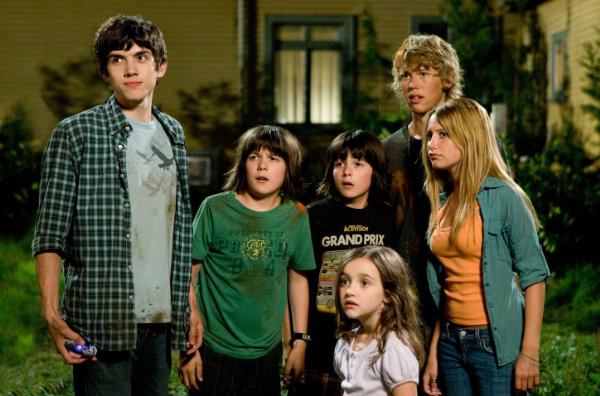 A talented and mostly unknown young cast and equally talented, if somewhat underused, group of comedians elevate what could easily have been a generic children’s adventure into something for the whole family to enjoy.

Set around a family’s 4th of July weekend getaway in Michigan, Aliens in the Attic is an adventure comedy where the children have to fight off an alien invasion whilst keeping their parents clueless as to what’s really going on. The family and their cousins rent a house in the middle of nowhere, idyllic for the parents and deathly boring for the children, in order to achieve some good old fashioned togetherness. Little touches such as the twin cousins Art and Lee (Henry and Regan Young) not even looking up from their Nintendo DS when they realize they have arrived add a touch of humorous realism to what is essentially an overused plot device, and immediately endear the characters to the audience.

These are not the sugary brats of so many live action kids’ films. Even the little sister (Ashley Boettcher) doesn’t fall into the overly cute trap, instead utilizing a comic timing unusual in someone so young. The two older boys, especially Tom (relative newcomer Carter Jenkins), are both charming, but the attempt to add some teenage angst to the character, Tom is too smart and is failing school on purpose, prompting an argument with his father ending with the words “I don’t want to be like you, I want to be cool,” strikes a false and slightly unnecessary note. It does allow for a “maths is cool” revelation towards the end of the film, and a supposedly heart warming reconciliation with his father (Kevin Nealon) but both feel slightly like overkill, there are enough subtle allusions to the strain on their relationship without this overt description of it.

The idea of having to keep the parents out of the drama as much as possible is a clever one, with much capacity for humour. The Aliens have a mind control device which only works on adults, so for the safety of their parents and the rest of the world, the children have to keep them in the dark. The two adults who get in the way and are consequently turned into mind controlled zombies are older sister Bethany (Ashley Tisdale)’s uber-annoying boyfriend Ricky (Robert Hoffman, who plays the role of a complete jerk so well that it almost goes past funny and back to horrifically annoying, more than once I wanted to give him a slap, just in case) and sweet old Nana Rose (comedy veteran Doris Roberts). The children get control of the remotes for each of these characters and play them like the best computer game ever invented. Some very comic moments, such as having Ricky slap himself repeatedly in the face or run full pelt into his ridiculous car proved a hit with the audience, both young and old alike. The climax of this device is a full in Matrix style fight between Nana and Ricky, the action dictated by the games constantly played by the twins. This is Tekken with geriatrics.

The let down of the whole thing is the aliens. Numbering only four in total, all the characters are so obvious, and their individual roles so small that the vocal talents of J.K. Simmons and Thomas Hayden Church are almost entirely wasted. Apart from some moments obviously designed to entertain the adults, including a sly visual reference to Alien, there is nothing to grab the attention, they are simply not scary enough. If children’s films through the ages have taught us anything, it’s that a bit of danger goes a long way, kids like to be scared. The sooner filmmakers realize this, the easier their jobs will be.

A film with good comedic potential and a cast to remember and look out for, this film would be greatly improved by the inclusion of an actual threat, thus elevating it from the generic kid’s adventure stuff to something worth watching again.