The visual splendor and invention of Tim Burton’s new film Alice in Wonderland is an object lesson in the collaboration of artists at the top of their game. ‘The thing that really intrigued me,’ says Burton, ‘was the opportunity to do 3D and Alice In Wonderland because it seemed like a proper mix of the medium and the material.  A few years ago I don’t know that I would have been as intrigued by it, but it seemed like the trippiness of that world and the tool of the 3D seemed like a good mix.’ The fact that the material had been covered so often in movies didn’t daunt him. ‘I never really connected to any of them but the characters and images and the iconic way they’ve sort of infiltrated the culture is just so strong and so I just felt like there was an interesting and great challenge. To me it felt like it was open territory. We’re not trying to be literal to the story, we’re trying to be true to what we felt was the spirit of the characters and the spirit of the place and it’s what Lewis Carroll gave to each and every one of us.’

‘I can remember reading the book when I was a kid,’ says Johnny Depp, who plays the Mad Hatter, ‘the supercondensed version at five, and then obviously the Disney cartoon took over. Because the story is so episodic and abstract and all over the place what I remember more than anything, and what a lot of people remember more than anything, is just the characters, and how the characters stick with you for some reason.  Even people who haven’t read the book remember all these characters.’

‘Funny thing about the story,’ Crispin Glover, who plays the Knave of Hearts, adds, ‘whether you’ve read it or not you feel extremely influenced by it. I was aware of it—I never did read the story, the original books—and then when I got the information that they were interested in me for this I quickly looked to see what the Knave of Hearts was. And I also realized that it was relatively different from the character that I played in the film.’

‘There was certain amount of pressure when you’re playing a character that’s very well-known and very beloved by so many people,’ says Mia Wasikowska, who plays Alice, ‘but we discussed that from the beginning, and one of the things we wanted to do was to take away that baggage that comes with her being Alice In Wonderland and more just find the teenage girl behind that iconic image and just and make her relatable.’

Depp also went to great lengths to individuate his performance from previous screen portrayals.  ‘Tim and I were early on were talking about if this guy were actually made up of different people, he would be the extreme side of these people so I wanted to go extremely kind of dark and dangerous. The idea was of trying to find those places inside, to go from the extreme sides of personalities So one minute you’re at full capacity rage and the next minute you’ve dropped in some kind of horrific tailspin of fear and then you go to some sort of height, great height of levity. And that’s what I tried to do in scenes as much as I could find the right moments for. I thought there should be another side to him, some damage, some trauma.  He’s a bit damaged.’

‘In terms of the look of the character,’ Depp continues, ‘some of the early stuff that I was thinking about and that Tim and I spoke about actually came right out of the book. But there were these weird little cryptic kind of bits that Lewis Carroll dropped in there. Things like ‘I’m investigating things that begin with the letter “m”’ that I found so intriguing while reading the book because you go through Alice, you go through Looking Glass, there’s never ever an answer for it. So what I did was just start to do a little research on hatters and found this thing called the Hatters’ Disease basically, which was because they used very toxic substance to glue the hats together which involved a lot of mercury that ended up poisoning them heavily. This poison would manifest in different ways; some were Tourette’s-like syndromes, some were personality disorders, some were even darker and weirder. And there was an orange tint to the actual stuff so that’s were all the orange bits came from.’ 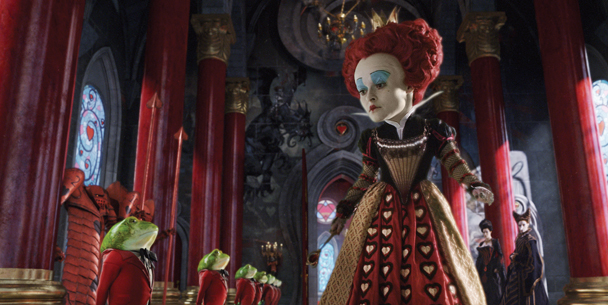 ‘I never say to anybody do this or do that. They’re the ones doing it,’ says Burton, ‘The joy for me is seeing what these great actors do with the character. I mean, I may give a little few hints or something. I think every good actor draws upon lots of different inspirations, especially when these guys are just working in this vacuum.  I mean, that was my only anchor, just one actor on a set with a green screen coming up with a character so I was very grateful that they all kind of made something out of nothing, basically.’

This was probably no more true than for Burton’s spouse, Helena Bonham Carter, who plays the Red Queen with a hilarious, delicious savagery.  Burton suggested she watch The Private Lives of Elizabeth and Essex, with Bette Davis, to inform her character.  ‘It’s basically Elizabeth the First,’ she says, ‘we’ve established that. And then we thought, okay, Bette Davis playing her, and Joan Crawford and Mommy Dearest…the main thing was I spoke with Linda Woolverton, who wrote the script, and said tell me about the big head, because it’s a really good idea.  And it does make complete sense because she chops off other people’s heads because she feels jealous of their normal size heads.  And then I thought, she’s a toddler, because she’s got the big head and she’s a tyrant, a toddler tyrant. Toddlers are tyrants.  They’ve got no sympathy for any other living creature—that’s our toddler, in fact—no empathy.  It’s a dictatorship: no please, no thank you, she basically just bosses us around.’  Was it invigorating playing such a demanding character? ‘Playing the Red Queen and shouting all day I didn’t actually have a voice after lunch, so I didn’t really speak much, except on set, which was probably what Tim liked. That’s why he asked me to play it!  How to shut me up.’

‘I imagined that your character tortured my character when they were kids,’ says Anne Hathaway, who plays the White Queen, ‘and that’s why I’ve gone a little mad. And why I’m so afraid of my dark side is because she used to make me do awful things and hurt me.’

Burton has forged a number of long-standing collaborations that stretch back to the beginning of not only his career, but often the careers of people he’s working with. ‘Working with Tim on Alice wasn’t really that much different from working with him on Pee Wee’s Big Adventure,’ says Danny Elfman, Burton’s long-time composer. This is their thirteenth film together. ‘Essentially, you look at the movie, don’t talk about it much and start coming up with lots of ideas and work through it, start a journey that you don’t know where it’s going to go, ever. I don’t think I’m any better at second guessing Tim musically now than I did 25 years ago but that’s part of the fun it because it’s always full of surprises. People think that we have some kind of magic shorthand, that’s it’s a real piece of cake that I could just walk through but it’s really absolutely no different after 25 years. There’s always a journey, and in any journey there’s like the tough part of the journey that seems like “oh my god, this is impossible” and then there’s the end of the journey where it’s like, “oh, this was all worth it”.  And thirteen times now I can say it was absolutely worth it.  When you’re a composer that’s a real lucky thing, it’s great.’

‘We met twenty years ago or something for Edward Scissorhands,’ Depp says, ‘and it was total luck that he decided to cast me in that film. It’s a miracle that people still hire me after some of the stuff that I’ve gotten away with.  Honestly.  Prior to Pirates of the Caribbean, they literally used to call me box office poison.  Which I was kind of  OK with.  It didn’t bother me at all.  But then Pirates happened and suddenly Tim doesn’t have to fight with studios to get me the gig any more, which he had to for many years. I’ve always admired Tim for his commitment to his vision and the impossibility of compromise,  for doing exactly what he wanted, the way he wanted in his own way, in his own very unique way. As far as I’m concerned he’s one of the only true artists working in cinema.’

Bonham Carter adds,  ‘I feel really honoured that he still wants to work with me and that I still feature in his imagination even though he knows me back to front, as it were.’