Win a signed poster from The Club

To celebrate the release of Pablo Larraín’s Berlin award-winning film The Club (El Club) on Friday 25 March 2016, Pure Movies are giving away a signed poster. 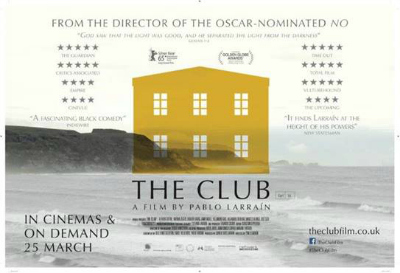 Written by Guillermo Calderón, Pablo Larraín, Daniel Villalobos and starring Roberto Farías, Antonia Zegers and Alfredo Castro, The Club is centred on four men who live together in a secluded house in a small, seaside town. Each of them has been sent to this place to purge sins from the past. They live according to a strict regime under the watchful eye of a female caretaker when the fragile stability of their routine is disrupted by the arrival of a fifth man, a newly-disgraced companion bringing with him the past they thought they had left behind.

Sorry the competition is closed.