Man Retains Virginity: genre-bending in The Wicker Man
Why an unorthodox approach to sexuality makes great viewing 40 years on.

Suki Ferguson is the deputy editor of Pure Movies. She's also written for Total Film, Studio Online and Film Fatale; she blogs about gender and film. 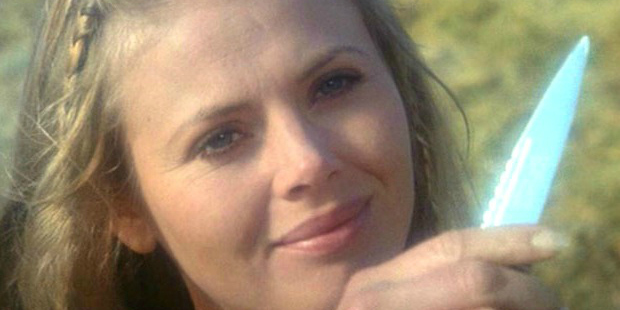 In a horror film scenario, the worst thing you can be is young. Or good-looking. Or sexually active. Or female. Even when plot, characterisation and moral fibre are all lacking, there’s something comforting about the fatalism of gorefests. They’re feelgood films in disguise.

Some horrors skip the slasher clichés of naive yet ‘feisty’ young damsels being preyed upon by shadowy men (Halloween, Nightmare on Elm Street, Scream) only to replace them with creepy adolescent girls (The Exorcist, any horror since The Ring) but The Wicker Man (1973) is a great example of a genre-bender that takes you somewhere a little different – still unsettling of course, but not in the usual way. In most horrors sex is a transgression punishable by death, but on Summerisle it’s celebrated – and it’s chastity that’ll cook you.

Echoes of 60s free love can be seen everywhere – kids sing earnestly about the birds and bees, women breastfeed babies in public, and an al fresco orgy looks like an entirely necessary form of evening entertainment for the inhabitants of a remote island. Willow the sexy barmaid is worshipped as a goddess, and is paid homage in the form of handsome young virgin Ash. Instead of being coy or vampish, she takes an innocent pleasure in sex and the natural power it brings her. Later, she teases our uptight copper protagonist Sergeant Howie by writhing naked against his wall and singing of milking bulls with lusty indecorum. Ordinarily, you’d expect the unapologetic sexpot with nefarious designs our hero to be killed off with a phallic weapon right after her topless scene – but instead she’s a canny mischief maker who thrives.

Howie’s female adversary is hardly very chilling, for him or the audience, especially when one factors in the pagan element and Christianity’s long-storied loathing of witches and hags (aka female religious non-conformists). But most of the women on Summerisle are, like their male counterparts, ordinary rustics whose only truly sinister quality is their refusal to be ruffled, either by Howie’s agitated investigations or the weirdly abundant hare corpses. The witchcraft on display – medicinal frogs, school lessons about restorative herbs, the fertility rite of naked ‘fire leaping’ – is all done by daylight in a bland, everyday manner (“of course they’re naked, it’s much too dangerous to jump through fire with their clothes on!”) that gives the island an air of eccentricity rather than encroaching evil.  Meanwhile the Lord of the island (Christopher Lee) celebrates the feminine focus of the pagan traditions and even adopts the imposing guise of the Tease to queer his own ‘affable squire’ identity.

Another interesting subversion centres on the virgin sacrifice; the phrase alone tends to conjure up images of a submissive girl in white. Both the audience and Howie are given this perfect decoy in the shape of Rowan, and when our burly, shouty middle-aged puritan is revealed to be the real sacrificial offering it’s one hell of a twist on tradition, for him and for us. His virginity isn’t played for laughs either, even when he is dubbed the Fool by the islanders, because his struggle with the issue is a serious one that reflects his religious devotion rather than a pedestrian idea of how a man might be expected to react when offered a quick tumble by a pretty lady.

Of course, in giving Howie a noble role in the final chapter of The Wicker Man, the film’s makers don’t endorse the antics of Summerisle’s society: it’s a horror film after all. We view it all through Howie’s eyes, and his conservative unease around  sexual liberation runs through the whole narrative – he’s hunted by deceptive women and conniving men whilst the staid God of Protestantism is dismissed in favour of a decadent goddess. The film’s nervy take on women was going on behind the scenes too – during and after production, the jokes about Britt Ekland being a pretty face who had the temerity to object to the full nude scene (and then be humiliatingly replaced by a bum double) became part of the film’s legend. The execrable 2006 remake then really went for the full-blown matriarchal conspiracy rewrite complete with women running an island staffed by eunuchs, courtesy of famed lady-hater Neil la Bute.

Luckily, intentions are hardly outcomes. If la Bute intended his version to be some kind of grand comment on gender relations, he must make do with it being known as one of the most hilariously awful films of all time (and perhaps a document of his own mummy issues). And Robin Hardy, who directed the 1973 version, is now more comfortable conservative grandee than avant-garde director who disparages the theories surrounding his one successful film. He couldn’t have predicted how prevalent the pagan-liberal attitudes of the sexual revolution would be, however – and today most people will find the idea of happy sensuality masking OMG SAVAGERY more entertaining than threatening. Perhaps that’s all that so-called ‘timeless’ cinema really is – something that gets passed around long enough to mean something entirely new.

If Hardy had made a more conventional horror, it might have been forgotten a long time ago – but by sidestepping the stereotypes of genre, gender, politics and characterisation, The Wicker Man became a more memorable piece of entertainment than more regular scare-fare. It’s also pretty much the only film I can think of that hinges its plot on male virginity without being a sex quest, and that’s one hell of an odd distinction if you think about it. The Wicker Man’s real legacy? Inventing the esoteric ‘Man Retains Virginity’ plot…

Everything is treated with Utmost Gravity without really offering much of reason why we should care.

The Wicker Man: The Final Cut ›

Why an unorthodox approach to sexuality makes great viewing 40 years on.